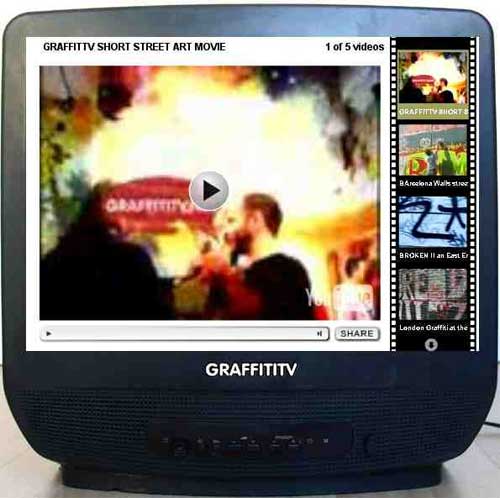 From our friend Pure Evil in London:

“GraffitiTV has a dream to create a full time Graffiti Television channel with art films and documentaries and feature films about graffiti…I am collecting films and producing small films of my own and working on a one hour film called STREET DREAMS with a filmmaker called KING ADZ who has just done a film about BLEK LE RAT.I am also really interested in looking at painting really closely, following the marks the artist creates as they build up a full piece from start to finish.. I love watching other artists paint and so i want to make that a big part of graffitiTV.

I have been doing a lot of travelling and meeting all the graffiti artists I admire and I have collected films that they have done and I am going to put more of those films on the site and hopefully get them aired on TV also. That means that they can then produce more and more films and people around the world can tune in and see films that are
not usually easy to watch because they are so underground.My favourite film out of all this is a film called MUROS LIBRES that my friend CHANOIR made, its all about the Graffiti in Barcelona, which is amazing… it features art by PONE, OYES, SPIT, ZOSEN, SKUM, CRANEO, SIXE, MISS VAN, DIOS, FLAN, XUPET, PEZ, MISTER and CHANOIR..

I dont really know how many films I have so far but it is a lot, and the list is growing every day..people send me films or links to films and I spend hours a day just webcrawling for new films…I just want to show how amazing graffiti is and promote it as an incredible art form and hopefully change peoples iideas about what graffiti is, and what it can be in the future.”