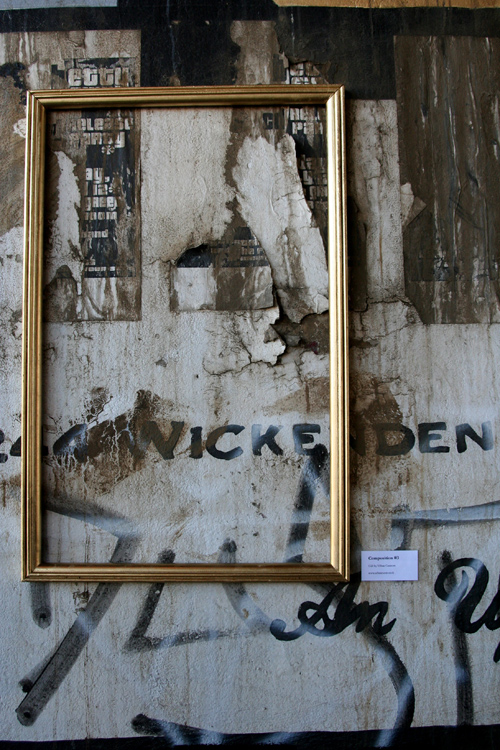 “The goal of the Urban Curators project is to engage the public in the celebration of the decaying urban environment, recog- nizing its inherent aesthetic qualities as well as the important role that it plays within our cultural habitat. The project achieves its goal by elevating common, overlooked objects and spaces within the city of Providence, Rhode Island to the level of high art.

The project achieves this elevation by literally hanging gold, gallery-style frames in derelict spaces within the city, framing objects and views that are of aesthetic or cultural value. By utilizing frames that one might expect to find in an art museum or gallery, viewers are forced to make connections between the urban landscape and the museum environment. Viewers are likewise encouraged to reconsider their prior conceptions of beauty and worth, understanding that the spontaneity of decay offers an alternative aesthetic to excessive design.

Humans have for centuries sought after the grandeur of ruins that were once the glory of ancient cultures, recognizing them as windows into the lives of past civilizations. The Urban Curators project proposes that we should likewise cherish those ruins that reflect modern-day consumerism and industr- ialization, realizing them as vehicles by which we can gain insight into our own society.

The frames themselves are hung with double-sided hardware tape and are easily removed without harm to the spaces in which they are placed. While this is a necessary component of the project, it likewise means that each frame will hang only temporarily. Due to the transient nature of the project, its success requires time and effort from not only the Urban Curators team, but from the community as a whole. While the project was originally born by six Rhode Island School of Design students, it cannot continue without input and partic- ipation from others. We hope that the community will interact with the project – finding our frames, removing them, relocating them, and installing their own.”