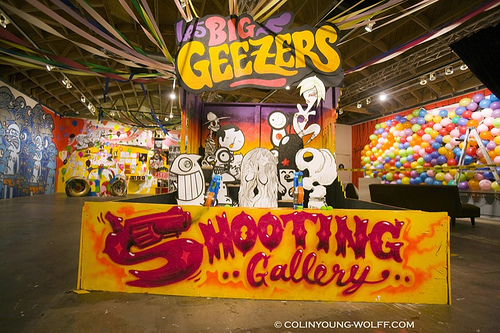 Unfortunately we weren’t able to make it out to Los Angeles for the opening of the Big Geezers show at the Scion Gallery earlier this month. But judging from the photos on Flickr, it looked like it was an amazing show and a hell of a lot of fun.  Seeing the photos reminded us of the types of art events that artists themselves would stage back to 2001-2002-2003 when the focus was less on selling work to wealthy collectors, and more on bringing friends together for a good time.

Over the last few years, Chaz (from the London Police) along with Galo, Fortress and the other Geezers have become good friends, so it was great to see the show come together.  Chaz sent us a note last night from Japan, giving us a rundown on how things went.  We thought we’d share it with you here as it gives a terrific sense of what the show was like:

“Roll up roll up! The circus is steaming into town. The Big Geezers are coming to LA for a November 8th show at the Scion Installation LA gallery.

‘So what’s all this here BIG GEEZERS all about?’ I hear someone pipe up from the back. Well, the BIG GEEZERS represents a would-be family of European and American artists who, over several years, have met, worked together and traveled the globe in search of adventure, hope and good times.

‘So what’s going to happen then?’ bleats another interested party near the rear. Well let me tell you sirs and madams. Expect fun, prizes, mirth and extravagance. All the fun of the fair. Suited, booted and packaged to delight the humming crowd. Bring your mates, bring your pets, bring your dinner and we’ll ‘ave it!

Moving on from the banal yawn-city, that IS modern day going-to-galleryness, the group have decided that in LA ‘entertainment ‘is the name of the game and so entertainment there shall be. This particular show the BG crew will attempt to blend visual ingredients with interactive methods to cook up a good ol’ splendid Saturday night pie. They hope to provide an odd and wonderful night out for all those wide-eyed enough to be concerned.

7.30pm With a microphone and a 15 man strong welcoming committee we asked people their names as they came in and introduced them like they were guests
of honor e.g “LADIES and GENTLEMEN its Marc and Saraaaaaaaaaa” at which point the welcome committee would bay their appreciation and cheer them a welcome to the show. it proved to be really funny and not only had a personal touch but began to create an atmosphere…

8pm whilst the welcoming continued we opened up the shooting gallery. the big
geezers had put so much combined effort into the show and built a circus/fairground style shoot out with wooden cutouts of our respective characters with holes in them. we bought a bunch of pretty high tech kids guns from TOYS R US and it proved to be another strong inclusion to the show.

at 8.30pm we began BALLOON DARTS whereby the public could take turns to burst balloons with darts. 10 balloons had prizes in and when you won you got a big geezers tshirt which was designed by Flying Fortress in a circus advertisement style. As the balloons went down a big collab piece was revealed which nicely connected the art with the game. Luckily no-one got hit by a dart and it was good times all the way to the next part of the show.

at 9pm my friend ABNER PREIS` made a clown performance/slideshow of his drawings which, again , gave the 700+ people who turned up another show within a show and another incling of entertainment.

At 10pm the fairground closed and i have never felt such a buzz of MISSION ACCOMPLISHED among so many geezers. the reaction of the people and the crew of SCION was amazing.