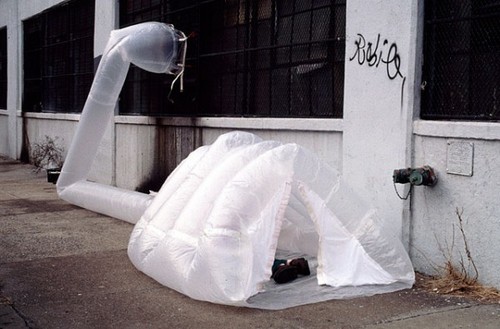 ParaSITE is an ongoing project by artist Michael Rakowitz (who we learned about via Charlie Todd’s blog, Urban Prankster)

The text below was nicked from Michael’s website.  Be sure to check out not only this project, but his other one’s as well.

“ParaSITE: Custom built inflatable shelters designed for homeless people that attach to the exterior outtake vents of a building’s Heating, Ventilation, and Air Conditioning (HVAC) system. The warm air leaving the building simultaneously inflates and heats the double membrane structure. Built and distributed to over 30 homeless people in Boston and Cambridge, MA and New York City.

PARASITISM IS DESCRIBED AS A RELATIONSHIP IN WHICH A PARASITE TEMPORARILY OR PERMANENTLY EXPLOITS THE ENERGY OF A HOST.1

paraSITE proposes the appropriation of the exterior ventilation systems on existing architecture as a means for providing temporary shelter for homeless people.

PARASITES LIVE ON THE OUTER SURFACE OF A HOST OR INSIDE ITS BODY IN RESPIRATORY ORGANS, DIGESTIVE ORGANS, VENOUS SYSTEMS, AS WELL AS OTHER ORGANS AND TISSUES.2

The paraSITE units in their idle state exist as small, collapsible packages with handles for transport by hand or on one’s back. In employing this device, the user must locate the outtake ducts of a building’s HVAC (Heating, Ventilation, Air Conditioning) system.

FREQUENTLY A HOST PROVIDES A PARASITE NOT ONLY WITH FOOD, BUT ALSO WITH ENZYMES AND OXYGEN, AND OFFERS FAVOURABLE TEMPERATURE CONDITIONS.3

The intake tube of the collapsed structure is then attached to the vent. The warm air leaving the building simultaneously inflates and heats the double membrane structure.

BUT A HOST IS CERTAINLY NOT INACTIVE AGAINST A PARASITE, AND IT HINDERS THE DEVELOPMENT AND POPULATION GROWTH OF PARASITES WITH DIFFERENT DEFENSE MECHANISMS, SUCH AS THE CLEANING OF SKIN, PERISTALTIC CONTRACTION OF THE DIGESTIVE APARATUS, AND THE DEVELOPMENT OF ANTIBODIES.4

In April of 1997, I proposed my concept and first prototype to a homeless man named Bill Stone, who regarded the project as a tactical response. At the time, the city of Cambridge had made a series of vents in Harvard Square “homeless-proof” by tilting the metal grates, making them virtually impossible to sleep on.

In his book, City of Quartz, Mike Davis describes a similar war on homelessness in Los Angeles. He lists a series of these hindrances throughout the city.

“One of the most common, but mind-numbing, of these deterrents is the Rapid Transit District’s new barrelshaped bus bench that offers a minimal surface for uncomfortable sitting, while making sleeping utterly impossible. Such bumproof benches are being widely introduced on the periphery of Skid Row. Another invention, worthy of the Grand Guignol, is the aggressive deployment of outdoor sprinklers. Several years ago the city opened a ‘Skid Row Park’ along lower Fifth Street, on a corner of Hell. To ensure that the park was not used for sleeping - that is to say, to guarantee that it was mainly utilized for drug dealing and prostitution - the city installed an elaborate overhead sprinkler system programmed to drench unsuspecting sleepers at random during the night. The system was immediately copied by some local businessmen in order to drive the homeless away from adjacent public sidewalks. Meanwhile restaurants and markets have responded to the homeless by building ornate enclosures to protect their refuse. Although no one in Los Angeles has yet proposed adding cyanide to the garbage, as happened in Phoenix a few years back, one popular seafood restaurant has spent $12,000 to build the ultimate bag-lady-proof trash cage: made of three-quarter inch steel rod with alloy locks and vicious outturned spikes to safeguard priceless moldering fishheads and stale french fries”.5

PARASITES RESPOND TO THIS DEFENSE BY ANCHORING THEMSELVES WITH HOOKS AND SUCKERS ONTO SKIN, OR DIGESTIVE MUCOUS MEMBRANE, AND BY DEVELOPING PROTECTIVE DEVICES AND SUBSTANCES WHICH LESSEN DEFENSIVE CAPABILITIES OF THEIR HOST.6

The system by which the device attaches or is anchored to the building is designed to allow the structure to be adaptable. The intake tube can be expanded or tightened to fit the aperture of the vent through an adjustable lip made possible by elastic draw-strings. Hooks are attached to the metal louvers for reinforcement.

THERE IS “TENSION” BETWEEN A HOST AND ITS PARASITE, SINCE THE HOST ENDEAVOURS TO GET RID OF THE FOREIGN BODY, WHILE THE PARASITE EMPLOYS NEW WAYS TO MAINTAIN THE CONNECTION WITH THE HOST.7

The connection of the inflatable structure to the building becomes the critical moment of this project.

Since February 1998, over thirty prototypes of the paraSITE shelter have been custom built and distributed them to homeless individuals in Cambridge, Boston, New York, and Baltimore. All were built using temporary materials that were readily available on the streets, such as plastic bags and tape.

While these shelters were being used, they functioned not only as a temporary place of retreat, but also as a station of dissent and empowerment; many of the homeless users regarded their shelters as a protest device, and would even shout slogans like “We beat you Uncle Sam!” The shelters communicated a refusal to surrender, and made more visible the unacceptable circumstances of homeless life within the city.

For the pedestrian, paraSITE functioned as an agitational device. The visibly parasitic relationship of these devices to the buildings, appropriating a readily available situation with readily available materials elicited immediate speculation as to the future of the city: would these things completely take over, given the enormous number of homeless in our society? Could we wake up one morning to find these encampments engulfing buildings like ivy?

This project does not present itself as a solution. It is not a proposal for affordable housing. Its point of departure is to present a symbolic strategy of survival for homeless existence within the city, amplifying the problematic relationship between those who have homes and those who do not have homes.

The issue of homelessness is of global proportions and it is foolish to think that any one proposition will address all the issues associated with this problem. There are many different types of homeless people. The mentally ill, the chemically dependent, those who are unable to afford housing, men, women, families, even those who prefer this way of life are included among the vast cross section of homeless people in every urban instance. Each group of homeless has subjective needs based on circumstance and location. My project does not make reference to handbooks of statistics. Nor should this intervention be associated with the various municipal attempts at solving the homeless issue. This is a project that was shaped by my interaction as a citizen and artist with those who live on the streets.”