Before you can recognize the accomplishment’s of those in the present, you have to honor those that came before us. It is in this context, that we absolutely love Erik Burke’s most recent project, Writer’s Bench. 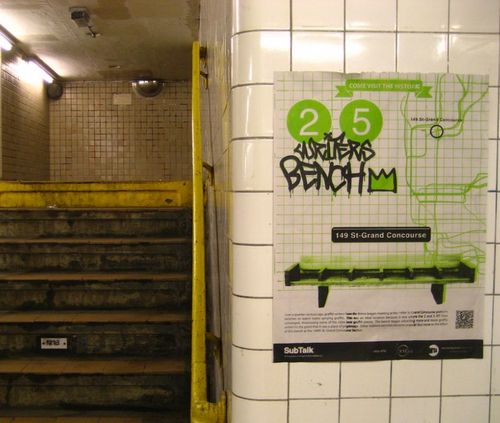 I recently installed a plaque at the Writers Bench to memorialize the Subway Graffiti movement.  I figured, the MTA sure as hell wasn’t going to do it, so I did myself. After going back more than a week later to see if the plaque was still there a cop walked by and casually said, “See that kid, that is old school.”

We chose to honor the 149th St. & Grand Concourse bench where graffiti writers began to congregate in the mid 70’s. Although there were similar Writers Benches throughout the city, this particular bench was the most popular and seemed to embody the vibrant and tenacious graffiti movement.

The project pays homage to emergent culture and physical social networking sites through a plaque and poster campaign. 100 hand-screened 2 color prints were made and distributed throughout the NYC subway system and the plaque was installed on site.

“You are presently siting on the most historic writers bench in all of New York City. The writer’s bench is an important symbol and historical marker for graffiti writers. Beyond being a physical bench it grew to be a verb in it’s own right, describing the action of watching graffiti pieces travel into the station on the train. At the bench, writers congregated not only to piece watch but to critique, study, meet other writers, teach, sign each other’s black books, and discuss layups and yards. In a way the writers’ bench was the emergence of an unsanctioned free school dedicated to the tradition of graffiti. As time passed the writers’ bench evolved from being a great location for piece watching to a popular gathering place for writers from all over New York City.

The first writers’ bench was formed around 1972 and located on W. 188th St. in Manhattan. Many writers’ benches flourished since that time and up through the 80’s before slowly being dissolved. Some of the most notable were the benches at the Atlantic Ave. and Brooklyn Bridge stations. Although the writers’ bench community has now shifted to other locations, such as online, these benches are remembered as icons that attest to the explosion of the graffiti writers movement and d.i.y. culture. “