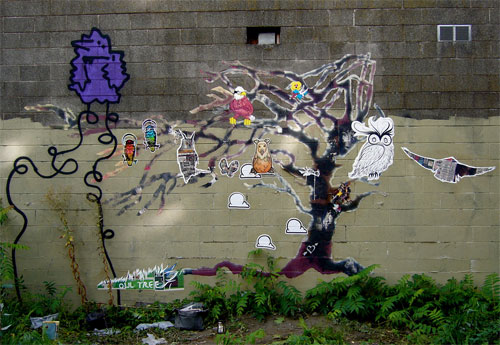 “Back in September a group of Seattle street artists decided to have a go at collaborative project. It began with a conversation about the street art scene here and how more than a few people use birds in their work somehow and the mention of a dream I’d had involving a [street art] tree covered in owls. I was surprised and delighted to find that people were sincerely interested in taking that dream image and making it a reality. Thus The Owl Tree was born. After selecting a suitable location, one of us created the tree [9ft tall and 12ft wide] and then everyone else created something to go on or near it. It’s not a legal wall so the location was kept secret. We did everything we could to extend its life and give everyone who was interested ample opportunity to contribute. Everyone who added to it did so on their own time, so the Owl Tree has evolved quite a bit over the past couple months. It has lasted much longer than any of us anticipated [the building is slated for demolition] and more people contributed than I ever dreamt might have an interest in such a project. At last count 21 different artists/collectives had added to the wall. As far as we know, this is the first large-scale collaboration of Seattle street artists. I hope it’s just the beginning.

The weather has now turned and the tree is showing its age, but we have a wonderful photographic record of all the work that went into it. Unfortunately, no single photo really does justice to all of the work that was done.