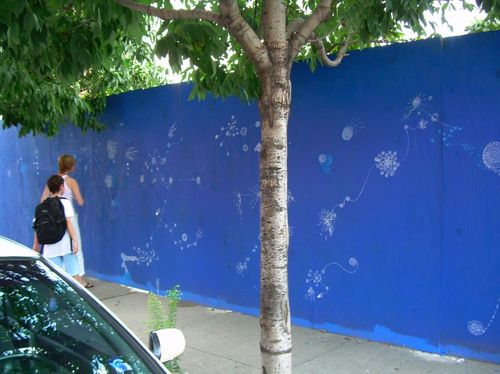 Yesterday morning, Sara and I went on the The Brian Lehrer Show on WNYC Radio to talk about the role of that street art is playing in the current economic climate. You can listen to it here:

All in all we thought it went pretty well. The debate about street art being nothing more than vandalism quite honestly bores us to death. We were glad that the host, Brian Lehrer, didn’t waste the whole show on this subject. (Most radio stations would have done so for sure)

This post on the WNYC message boards is indicative of the lack of understanding out there:

“Your guests (meaning Sara and I) are a complete sham. They should be arrested rather than featured on the air. Come on, do we really want that shit all over the place again? Tell them and their clientele to go get a real job and do the work to become real artists rather than this easy bs these idiots are praising as “free expression”. “Humanistic”.. Please. Go back to academia. You obviously never left it. There are plenty of ways to get a message across without defacing public property.”

And then this morning, we received a wonderful email that, for us, illuminates exactly why the subject of vandalism is so limiting:

From Sally (the artist who did the work on the photos above):

“hello. I heard the show on WNYC. I am glad to hear of your collective. I share much of what you talked about. I have been working on a street art since july of 08.  It was sheltered by some trees and cars so that I never got caught. Once the police stopped and yelled “Stop drawing on the wall”  I kept a look out and would hide. I am using acrylic ink and a small brush. A friend called it ‘slow graffiti’ A few months ago someone called the police and 2 squad cars and a black sedan came!!  They gave me a warning, said if I was caught again they would arrest me. I did’n't know that graffiti is a felony. so I stopped working on it.

later I called the owner of the construction sight and he finally agreed to give me a letter of permission. It is near my studio, I can see it from my window. It is a wall surrounding a construction sight that is not being constructed.  On Bergen between 4th and 3rd Ave. on the corner of Third Ave. in Brooklyn. I started it because they painted the wall blue, and it was a huge expanse and was calling to me.  I have a lot of work finished and instead of waiting for someone to allow me to show my work I could take the initiative and show it myself. It is also in a place where lots of people who might never go to a gallery would see it.  It is a funny area because it borders park slope and Boerum and the housing project.  There is a half way house on Bergen.  I love working on it outside, I believe I am adding to the neighborhood, it makes me part of the neighborhood, and people are always stopping to talk to me.  I have had many interesting and appreciative comments. I have met a lot of people, it is different from the experience of working alone.  Art gives back to people, it feeds the soul,in that way I feel I add to the neighborhood. I know that it wont last but I like the fact that it is about the experience of making it, the conversations I have had, and that all is fleeting any way.”