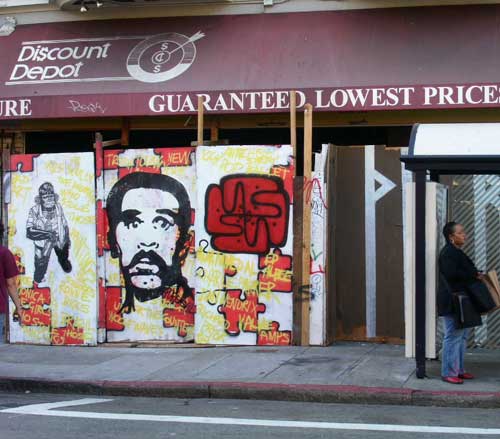 “hi there from sunny san francisco… i liked the whole discussion about the anti graffiti ads.. on the day they launched the whole anti graffiti war the mayor came to lower Haight and they started a ‘public buffing’ of a piece I had painted about 2 weeks ago.. the owner of the property came out and told them to stop… he told them that since the whole wall had gone up tagging had stopped and so they stopped buffing the piece with their unsightly poo brown paint and then they left.. I went back and I cleaned up the mess they’d made and here’s the finished wall….the chimp is by nate van dyke. I can see why they are doing what they are doing, they want to be seen to be CLEANING UP THE STREETS but San Francisco should feed and shelter the homeless people living on the streets before they waste money stamping out graffiti… which is a hopeless enterprise doomed to fail….While San Francisco sleeps, taggers are out there RIGHT NOW…”