Remember a few weeks ago when we posted that the city of Bristol was considering keeping a Banksy piece that appeared one weekend on the side of a sex clinic?  Well the BBC is reporting today that due to the overwhelming support of the public on the internet, the piece is going to stay up. 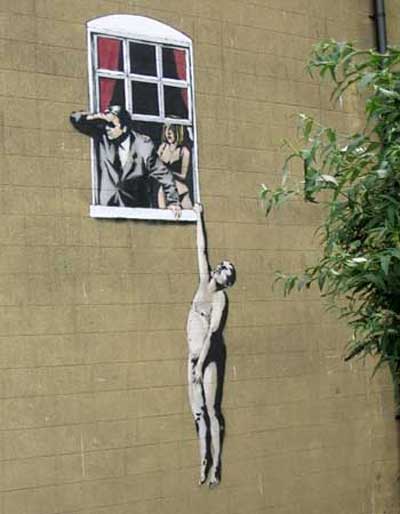 Naked man’ mural allowed to stay
‘Guerrilla artist’ Banksy’s graffiti
The mural is near Bristol City Council’s offices
A piece of graffiti by Bristol artist Banksy has been allowed to stay after what the city council described as “overwhelming support” from the public.

The stencilled image shows a woman in her underwear standing behind a suited man leaning out of a window, and a naked man hanging onto the ledge.

The public was invited to decide whether it should stay on the side of a building on Park Street or be removed.

An internet discussion forum showed 97% of submitters supported the work.

Many people who logged on highlighted the fact that Banksy is a Bristolian, and that his work “brightened up” the urban environment.

However, the council warned the support of the Banksy piece is not support of graffiti in general, and an extra council team has recently been created to tackle graffiti.

Three of these argued the work might encourage imitators and other graffiti that was less desirable; the others said graffiti of any sort made the city look scruffy.

“It is fantastic that Bristol’s residents have felt so strongly about it as a work of art that they have been encouraged to register their views,” said councillor Gary Hopkins.

“I have seen it bring a smile to people’s faces as they stop to appraise it, so I personally am pleased that Bristol wants it to stay.

“I stress that the decision to keep this Banksy image is not a green light for more graffiti in the city.”