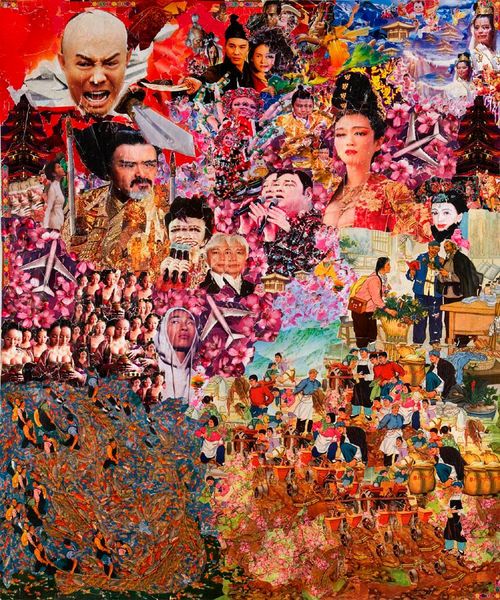 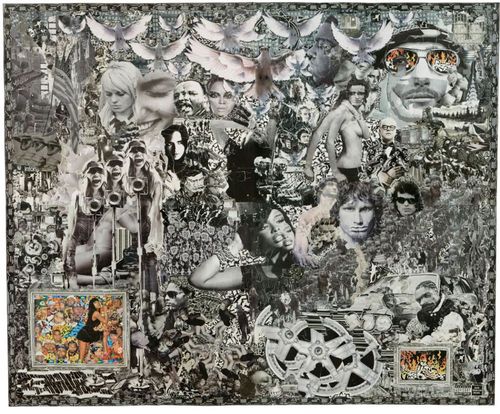 Last night Sara and I had the pleasure of attending the opening of our friend Michael Anderson’s new solo show, COLLAGE GEOMANCY, at Marlborough Chelsea Gallery in New York.

The show is absolutely magnificent. If you do one thing this weekend (even if it’s raining) go over to the gallery on 545 West 25th Street and check it out.

A few months back Michael asked us to write the essay for the catalog.  We were absolutely thrilled and honored.  So rather than tell you about the show, we thought we’d share with you our what we wrote for the catalog:

It is said that each day, from the moment we New Yorkers awake until the time we fall asleep, we will encounter 3,000 advertisements.  It is in this context, at a time where mass media advertising is persistent in almost every moment of our waking lives, that the art of Michael Anderson can best be understood.

Michael Anderson is part of a new generation of contemporary artists who have grown up not only with mass media, but also with the philosophy that pop culture is there for the taking and the true power of a work is not found in its original form, but rather discovered only when remixed and rearranged into something completely new and fresh.

The pop culture imagery in the advertisements that we encounter each and every day has one sole purpose; to sell us something. But in these advertisements, Michael finds and discovers tiny elements of energy and life that can be transformed into abstract shapes and colors. During the process of breaking things down and then rebuilding them up again into something new, he strips the original advertisements of their power of persuasion and replaces them with something much more complex and insightful. What he ads is an emotional dimension – a soul to the work - that was completely lacking in the original.

With his art, Michael engages in the act of “upcycling” - transforming and reducing a degenerative form of art - advertising - into something of far greater value.  The finished work takes on the quality of a Hindu or Buddhist mandala, where through the repetition of fragments of imagery, it becomes almost hypnotic, luring the viewer into a trance- like contemplative state that stays far longer than expected.

One finds in Michael’s work a deep appreciation for graffiti art. He creates abstraction by deconstructing, distorting, and then combining letters to create a feeling of motion and energy that is greater than the letters themselves. In graffiti, letters often become so abstracted that they lose all legibility.  Similarly in Michael’s work, text taken from advertisements (which at its core needs to be easy to read and understand) is completely abstracted making the words almost undecipherable. The result is something completely unique and incredibly absorbing.

The work included in this exhibition demonstrates not only the hand of a talented artist, but also that of an obsessive collector. Each piece is an assemblage of street advertisements meticulously hand-collected by the artist over the course of many years. Layered deep in each work is a visual topography of the vibrant ethnic neighborhoods of New York City that collectively drive its pulse and frenetic energy.  Fragments of images from posters acquired in the dead of night on the streets of Little Jamaica in Brooklyn become mixed and interwoven with those found years later across town in Spanish Harlem.  As a collector, Michael wanders the streets incessantly, waiting until the time is right to harvest posters, all-the-while understanding and knowing which posters are layered on top of which. Once taken down, he can then methodically pull each apart to capture imagery covered up many months before.

“Remixing” is the true art form of Michael’s generation and he is one of its visual masters.  Michael “samples” images the same way a hip-hop artist samples music. For Michael, scraps of torn paper become notes that can be played and repeated.  Like a sculptor, he layers and repeats fragments of images into a visual staccato that he brings together on the canvas to create an elaborate and wonderful tapestry.  By rearranging pop culture iconography into something that is new and unique, Michael becomes both critic and participant.

All this is to say that it is too easy to pigeonhole Michael Anderson simply as a “collage artist”. For us, this is doing him a great disservice. Michael’s work has none of the nostalgic trappings of collage, allowing it to remain completely   contemporary and – in the end – timeless.