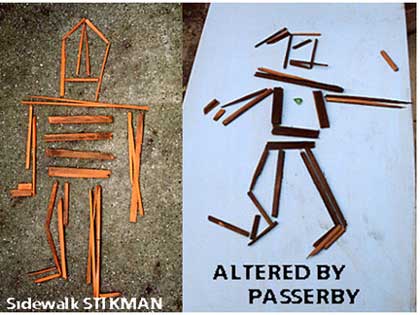 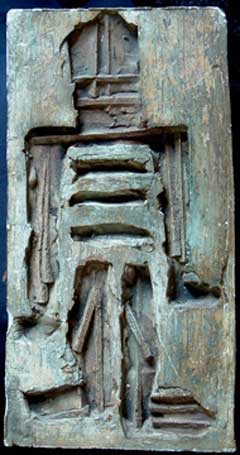 As a kid they always called me the Stick because I was so
thin. Much of my early public art consisted of towers made of scavenged bricks
and wood and sticks assembled on the streets and sidewalks. I made more stick
towers than anything else because sticks were easiest to come by. Then I began
getting objects and pictures that I found at flea markets and yard sales and
sticking (gluing) them to walls and stoops and poles ect.. This evolved into
making stickers obsessively and deploying them everywhere I went. I liked the
idea that no one could know who was responsible for the shoes stuck on the brick
wall or the doll eyes glued onto the breast of the Bikini Babe on a movie
poster. One day I came across a plaster plaque that someone had made by placing
sticks into wet plaster and then removing the sticks leaving only the impression
of the sticks. It was a stick man. However he wasn’t sticks at all but what was
left after the sticks were gone. I was captured by his presence and absence.
Everything I installed on the street up to that time was left
anonymously.(except for an early, ancient tagging phase) The Object was there on
the street but the me in it was totally absent. I realized as I stared at this
plaque that STIKMAN would represent the absence of personality in art. The
little being with no stable form. The unknowable consciousness. The disconnect
that most viewers of street art feel with the perpetrators of the artwork. (This
detachment forces them to face the artwork in the context it exists in there on
the street. It doesn’t matter who was behind this artifact. It just was. And it
transcends the “onormal” accepted rules for art.

STIKMAN is usually
installed without any lettering, allowing it to be interpreted within any
environment that the viewer finds it and to be named whatever. The STIKMAN
moniker was only intended to have meaning to me because I knew the rest of the
body of work that it was connected to relative to sticking (attaching) and
sticks. Usually where you find a STIKMAN you will find some other object or
image nearby that I have attached to something. I chose the letters minus the C
because I liked the way it flowed when I signed pieces.

Being a Graphic
designer I am obsessed with advertising, marketing and brands. With this in
mind, I knew that I had to say something with my street art. Everything that
everyone has ever put up on the streets represents them—or the company they
are putting it up for—in some way. We are all slowly branding ourselves into
an image or idea. I wanted to play on this thought, and have the public and
street artist question what it is they are branding. I also want all us to think
about how brands have taken over our cities, and our art.

Somewhere deep inside of all of us lurks a
depraved Pervert. I think I simply just chose to embrace it…I also chose to
omit the vowels, hence Prvrt. I’ve been a little prv since I was young, and I’ll
no doubt become a lecherous old man. Some fools mistake the abbreviation of my
name for Prvt, or Private first class, but I ensure you, I’m really much more of
a low class Prvrt. Sound it out, bitch. My work doesn’t strictly revolve around
sexual subject matter, but my real passion is stencilling my original erotic
imagery. For all of my girlie stuff, I take all of my own reference photos of my
own models. I’ve never had to pay for a model, and I never seem to have trouble
finding them. What can I say? Ladies Love to Shed Their Shirts for Mr Prvrt. The
only payment I offer is the first print of every stencil based off that
particular girl. Thats usually compensation enough for the model, and the
occasional boyfriend. Otherwise, most of my other work gravitates around
intriguing animal life…I’ve never found a way to pair naked girls and weird
animals, but it seems like that would be rather Prvrtd.