When you travel to new cities it’s inevitable
that you run into some road blocks along the way. It comes with the territory,
but how you respond to the adversities of certain situations is what is
important. In the middle of the Czech Republic there was some train
complications that delayed the arrival time into Vienna by several hours. The
train arrived into Vienna near midnight with most of the passengers being
extremely agitated, along with the people waiting for them at the train station.
I suppose I was semi-fortunate in this situation as the only thing waiting for
me in Vienna was the city itself. The down side of the late arrival was finding
a place to sleep and store my belongings. The youth hostel that I was planning
on staying in was out of the picture. The two options now were either sleeping
in an overpriced hotel, or storing my belongings in a train station locker for
the night, then walk around the city putting up wooden arrows, and eventually
finding a park bench somewhere to fall asleep on . If your going to get wet you
might as well just dive right in, so I chose the second option. Sleeping on the
streets is underrated. It’s not that dangerous, or uncomfortable if you have a
little street smarts and common sense about you. After 3-4 hours of walking the
streets putting arrows up, tiredness kicked in. You have to be creative in how,
and where you sleep on the streets. I must admit there are some crafty homeless
people out there with how they construct their sleeping arrangements for the
night. I prefer a little privacy when I sleep so I was looking for a park where
there would be less noise and traffic. Construction sites are a homeless persons
paradise, not for sleeping, but instead to load up on tarps and random items
that can help during a cold night. Found a Construction site but the pickings
were slim because all I walked away with were two plastic gunny sacks. I walked
more and found an isolated park to sleep in. Put the plastic sacks on the grass
and slept with one eye open.
It’s too bad that the turn of events with the
sleeping arrangements and Police in Vienna left a sour taste in my mouth. Aside
from these situations Vienna was enjoyable, but I felt after 3 days that its was
time to pack up and head for Budapest for a new start.

/>Its silly the amount of beef that goes on in the streets. Here is some fresh
Mad Cow to be chewed on. 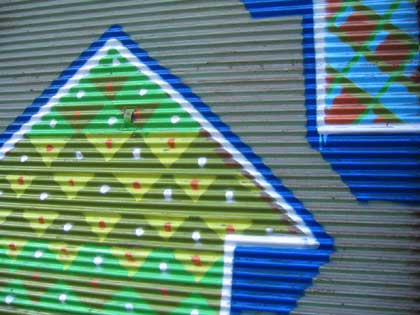 working with patterns and designs on the wooden arrows has
inspired the painted ones as well. 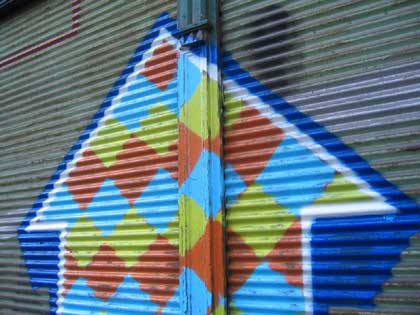 Seize the moment, right?! I saw these shutters the
first night when I left from the Train station doing the wooden arrows. The next
day I returned to the shutters to feel out the situation. The location, size,
and visibility of these shutters were all on point. I went back to the Youth
Hostel and got my paint, then returned and started painting. The hardest part
about doing a daytime illegal is convincing the public that you are “suppose” to
be painting on the wall. Doing a lot of detail on an Illegal is convincing to
the public viewer, and police that the painting is legitimate. After about an
hour of painting sure enough the Police arrive. Two angry Cops get out of the
car and start yelling at me in German. I tell them I speak English and they
demand an explanation for the paint on the wall in addition to verifying my
Passport. I already had a story fabricated and kept telling it to them over and
over. In order to call and talk with the owner of the shutters to see if in />fact I did have permission as I told them they needed the address of the
building. The funny thing was it took the two cops about 20 minutes to locate
the address that was eventually found on the rear side of the building. They
started making phone calls (I assume to the owner?) one after the other with no
luck of reaching anyone. Despite our spoken language barrier, I could easily
understand the frustration of these two cops in their body language. As time
grew so did their lack of patience. The two cops confiscated my paint while we
waited for a phone call from either the police headquarters or the Owner, I’m
still unsure. Either way they got the call on the phone, and told me they
reached the owner and he said I didn’t talk with him and that it was “not O.K.”
to paint on his wall. Thinking I’m taking a ride to police headquarters in a few
minutes the cops surprised me with handing me back my passport and saying that
“this is not the United States and that I can’t paint
other people property
in Austria.” I wanted to finish the painting but didn’t want to push my luck by
asking for my cans back, or if I could finish. On the walk back to the youth
hostel I couldn’t help but wonder if the Austrian police thought that painting
on other peoples Property in the USA was actually legal?!

Incorporating this wooden beam into the patchwork was fun. /> 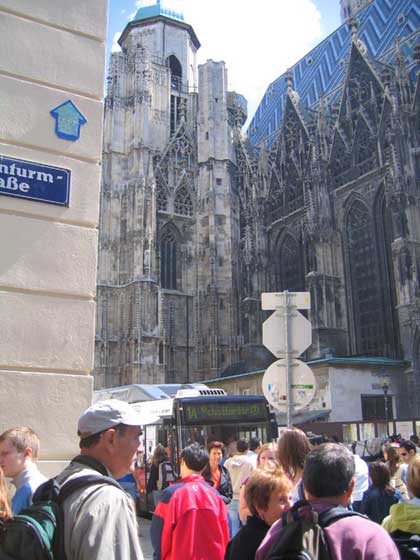 align="center">the roof of this Cathedral is where it’s at. style="clear:both; padding-bottom: 0.25em;">