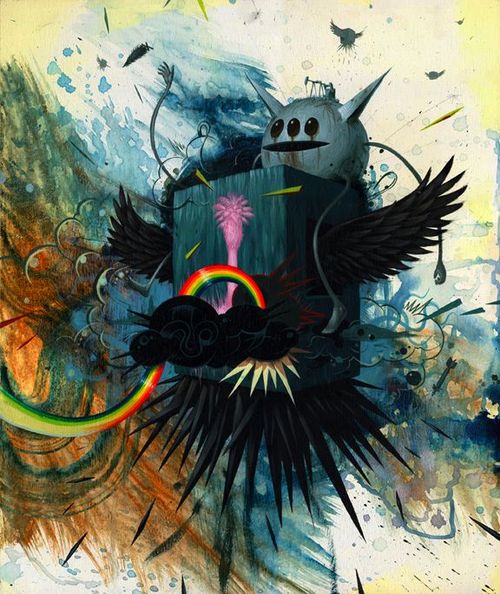 Age: 33
Hometown: Fullerton, CA
Where do you now live?: Riverside, CA
Where would you most like to live?: We are an hour from Los Angeles so it would be nice to move closer at some point. My wife and I always talk about moving to Oregon but we have a ton of family and friends here. Plus the weather is nice so I don’t see us leaving any time soon.
Who was your first “hero” in life?: Kind of embarrassing but the first person I remember thinking was heroic was Luke Skywalker. And I remember thinking my dad was pretty heroic. He had fishing and art skills.
What is your favorite thing to do on your day off from work?: I really need a week off at this point. I’d probably spend it with my wife and daughter, maybe we’d go to the zoo or something, maybe go feed ducks at the park. Something simple. And I’d get a nap in the afternoon. Just a nice lazy day.
What is your favorite color?: A mixture of Burnt Umber and Pthalo blue- it makes beautifully different shades of grey.
Who (or what) do you love?: The easy answer is my wife and daughter. But there’s so many beautiful things in the world to love- looking at the stars, the smell of Ultra Flat Black, climbing a mountain, ice cream, jumping into the water on a sweltering day, anything that overwhelms the senses with goodness. 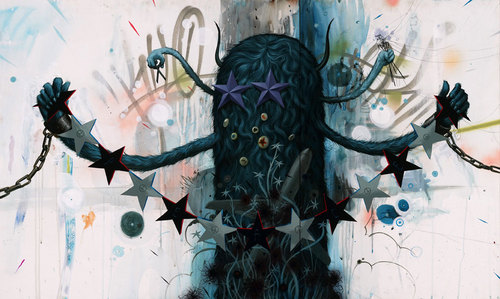 Who and/or what are some of your influences?

In high school I was looking at a lot of Impressionists and NY graffiti writers. Then in college I discovered hundreds- thousands of artists, and by now I’m a fan of so many. If I had to narrow it down to the ones who influenced me most, probably the Clayton Brothers who I had as teachers, Rich Jacobs, Van Gogh, the English illustrator Patrick Woodroffe, Mear, Seen,  some of the surrealists like Max Ernst, Frida Kahlo, probably throw Hayao Miyazaki into the mix as well.

I’m drawn to artists that do their thing and do it well. Kinsey is making some incredible art these days. Dave Choe is nuts. Travis Millard… Maya Hayuk… Mark Ryden is always doing his thing well. AlexOne..  Esther Pearl Watson, Monica Canilao.. there’s a lot of great art coming up..

Lots of colors, fragmented imagery, tight rendering mixed with randomness and mark making. I am starting to get much looser, which is how I painted when I started out so things are coming full circle somehow.

I always tell my wife I’d trade all my visual art skills to be a badass acoustic guitar player. I just want to sing songs around the campfire. In reality I wouldn’t trade what I have.

I used to really fear getting caught for graffiti. When I was younger the rumor was that La eMe, which is the Mexican Mafia, would chop off your pointer finger if you were in prison for graffiti. Especially if you were a white boy. That really used to freak me out, but I found out later it was untrue. I think now that I have a daughter the big fear is that something happens to her, or that I die early and miss seeing her grow up. Probably the same fear all parents have.

Usually I have some idea of where I’m headed with my art but right now I have no idea. I’m just happy to be making some things and hope I can keep on doing that.