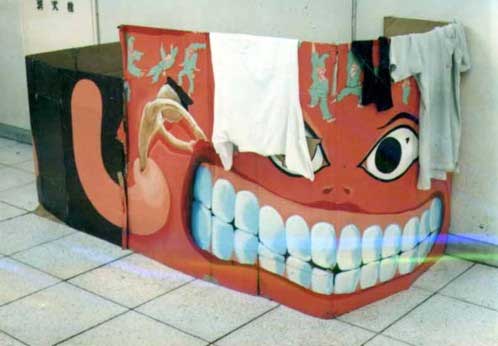 From Murphy comes a series of links to a collection of photos of painted cardboard structures that the homeless lived in back in the 90’s in the Shinjuku station.  The site were we nicked them from has this description:

At the end of the 20th century
In the underground beneath the enormous metropolis of Shinjuku.

There was a commune, an independent nation even, of people who lived their lives on the street.

Hundreds of cardboard houses grew up in the underground passageways of the west exit. On each of these houses were paintings. Mysterious and magical, they threw vivid colors of resistance out into space, a kaleidoscope of derisive laughter against the state.

A group of painters painted them. Leading the group was Take Junichiro, who is also the person who made this website. Once during the painting process Take was arrested and forced to spend 22 days in jail. The painting continued even after his arrest, but finally came to an end when the underground kingdom was destroyed in a huge fire.

After the fire, the authorities started reconstruction on the tunnels so that the homeless could never occupy them again. They succeeded in kicking the homeless out of the west exit underground.

This website was made to call attention to the paintings on the cardboard houses, and bring back to life the kingdom within a city that once was there but has now become nothing more than a phantom.

The works included here are only a small portion of all the works that were painted.

We didn’t photograph the works ourselves. We felt that the moment of life didn’t leave room for recording.

The photographs here are the work of photographer Sakokawa Naoko and others who sympathized with what we were doing. They generously gave their permission to use them.

We give them our deep thanks.

This wasn’t art that bowed to the system, nor did it have the weakness of finding authenticity only in its marginalization. This is why the work that sustained the cardboard art is so important and valuable.