Lat night our friend href="http://www.workhorsevisuals.com/">Logan Hicks told us about a new
hotel in San Francisco href="http://www.sfhoteldesarts.com/hoteldesarts/">Hotel Des Arts that
recently asked an incredible group of artists to each design a hotel room. Logan
tells us: “The hotel is pretty cool. More of a European hotel vibe than the big
American feel. It is relatively cheap too. You can get rooms starting at $60,
and it is right in San Fran.”

In February Logan’s Workhorse
Collective is going to be doing a show at Hotel Des Arts. Each member will be
doing their own room. The list right now is, Logan Hicks, Shiro Fujioka, Arvay
Adams, ManOne, Eric Rodriguez, Sergio Hernandez, and Lesley Reppeteaux. The
opening will be in the last half of February 05.

Logan forgot to take
pictures of his room, but he did take a picture of the door as he was
leaving:

Logan will be repainting his room in February but if you go up to
San Fran before then and you want to stay in the the Logan room, ask for room
210. 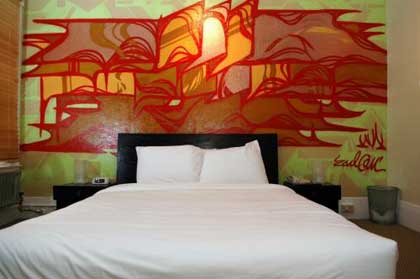