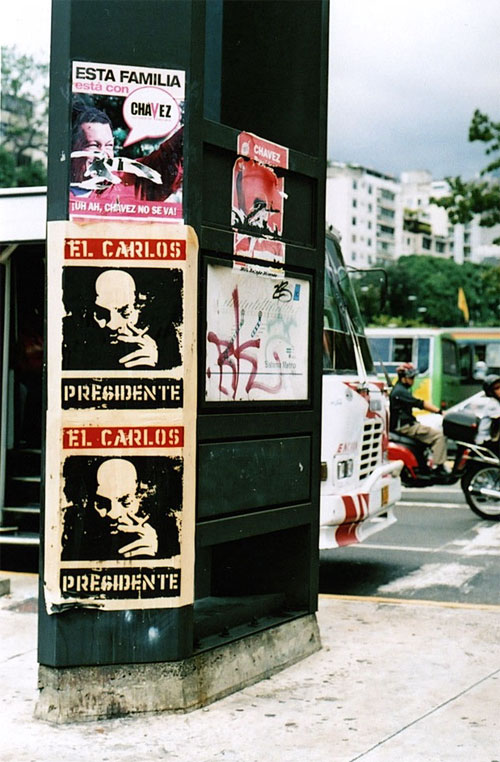 On December, 3rd of 2006 about 74% of Venezuelan registered voters went to the polls to exercise their right to vote. Approximately 60% of these confirmed their desire to re-elect, for an undetermined term, president Hugo Chavez. The outcome was easy to predict, everyone knew he would be crowned yet again, but the conservative media tried to convince us otherwise, and the government bullied and insulted the other 40% that abjectly and doggedly cast their futile vote. But I don’t care about stats and numbers. I don’t care about winners or losers, because in the end nothing changes, politicians crave power and are determined to do anything in order to get it. They’ll lie and cheat, steal and manipulate. They’ll hypnotize, terrorize, sell promises and buy votes. Prior to the elections and for an entire year all you could hear, see and breathe was politics. The city walls were emblazoned with political posters; The radio waves blabbed bullshit; Television channels blabbed bullshit; The pundits blabbed; The experts blabbed; The president blabbed. The political feud has been on in Venezuela for years, and I was sick of it. Sick of the fear, the rumors, the lies, the promises, the campaigns, the unrest, the
protests, the violence. Everything for the same reason, the same cause: the agglutination of wealth, the hunger for oil and cash. Ultimately I felt annoyed and betrayed, tired of the divergent opinions that led nowhere and the constant accusations that fled like missiles from one side of the political fence to the other. I began to loathe politics and the cheap parties that rise from it. I realized I didn’t trust the system that continued to mock me, instead I wanted to mock them. I began to confirm my suspicions that everything is rigged, and I hated the machine and its spinsters for making me feel paranoid and powerless. So, I began the project of EL CARLOS. I wanted
to tell them: “The joke’s on you and not us!”. I wanted to use art as a protest in their own forum: the streets, were they choose to sell us their crap. To alleviate the tension they had inspired in an ironic, satirical yet concerned statement; To protest the lies, the campaigns, the media’s message of confusion, the here say and rumors, the unrest they instilled, the manipulative rhetoric thry drilled into our conscience, for all of this: We gave birth to EL CARLOS. Me and my crew, the CCS.ZOO, silk screened about 200 posters of a fake political candidate we called El CARLOS. We bombed the entire city. We wanted to raise awareness, create doubt, make people ask questions, and change
the decaying and garish aesthetic that was eating away at our urban landscape. We created a poster to contrast the blatant and insulting posters that the political candidates used to pollute our city with their shameless pandering and constant groveling for votes. We wanted to let the people know that we don’t have to be pawns, that there was someone else to fear, someone with a mind of their own, that there was
someone stronger, and that this guy was El Carlos. We wanted to create a stir and a reaction. We wanted to resist, we wanted people to look at another face, another name, another alternative. I didn’t want to feel left out nor did I want to feel I was being inactive on the eve of the elections. I had an opinion. I wanted to act. Bombing the city
with our posters felt subversive. Run-ins with the cops who felt we should be jailed for committing subversive acts confirmed we were doing our jobs, yet we explained this “candidate” didn’t exist and that we wanted to change the facade of the city in a jovial and artistic way, (which somehow got us off the hook a couple of times.) The project was born because of my love for street art and and a careful appreciation for the urban landscape. I was able to do it because no one regulates, admits or screens the work. The work is free and democratic and it can be shared with everyone, like I am sharing
it here.