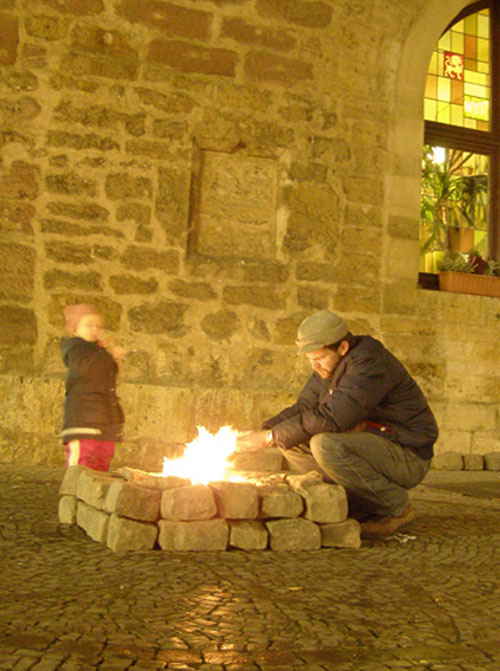 In Jena, Germany, the artist Steven Brown brought the power of the camp fire back into the urban environment.

In front of the town’s City Hall on the main square,  Steven built a stone hearth each night for 10 days (Jan 14-23 2007).  He simply built and burned a fire from sunset until midnight. Each night people stopped by and lingered and shared stories. There was no press and word spread the old-fashioned way. Slowly, there became a regular base of people who came every night to interact (and often bring the artist food and drink).
Here’s his artist statement:

On January 14, 2007, a small open cobblestone hearth appeared on the central Market of Jena. Small fires were built and tended from dusk until midnight for 10 consecutive nights. People periodically stopped to inquire about the fire, often staying for a while to talk or share stories. Under each day’s fire, pieces of fireproof glass captured a permanent record of the burning, a pyrograph in soot and carbon. At the end of each day’s burning the hearth was disassembled and the glass stored. A book containing carbon paper was used as a journal to collect a two-layer written impression of events. Once filled, one set of carbon copies was torn from the book and rebound in another smaller book.

Around the fire I met people I would likely not have otherwise met. As in life, strangers slowly became friends. Some returned every night, and some brought companions. Each person activated and helped define the experience, creating moments as dynamic and fleeting as the fire. One night a large family with children and parents and grandparents arrived. They had heard of the fire and bought sparklers specifically to light there in the cold. Suddenly and inexplicably I found myself in a swirling group of laughing children, their smiling faces alight with joy, the dappled warmth of the sparklers they held, and the slow glow of the fire. All that we have of our shared evenings now are memories, stains and residues like the marks on the glass and in the book. By generating this gathering place, by remaining open and patient I stumbled across something deeply human, something alive and impermanent, something perhaps one cannot seek to find.