If you’re one of the thousands of people who send us photos each week of the work of Julian Beever, we’re starting to feel like we owe you a bit of explanation about why we don’t (and won’t) feature Julian Beevers art on the Wooster site.

First, understand that it’s nothing personal. We recognize that the guy’s got exceptional skills at making something flat look 3D.  His skills in doing this is clear.  For this reason, and this reason only, we can understand why people are impressed by him.

So first off, if you love the work of Julian Beever, we can understand why.

When we look at photos of Julian Beever’s art, it leaves us completely empty. Void of any feelings or emotions.  We don’t get inspired by it. From the photos, it seems like the guy’s sole purpose is to impress people with his skills over and over again. The fact that he’s in almost every photo, smiling for the camera, really turns us off.  For us, it should be about the art, not him.

We think that actually, because Julian Beever’s so good at what he does, he relies too much on his skills and because of this, there’s no life or soul in the work.  Because we don’t feel any true passion in it, we don’t give it much value beyond being a novelty.
(We feel like his work is"the cotton candy of street art”.  You may like it for a little bit, but as you see more it starts to make your stomach feel a little bit queasy.)

The whole point of this site is to share with you what is inspiring us so that it inspires you. And if Julian Beever doesn’t inspire us, there’s no reason really for us to put it on the site.

Our hope is that by posting this explanation, while it probably won’t stop people from sending us that Julian Beever chain email that even my mother has received, it may explain a bit why if you’ve sent us it to us 15 times and never seen them up, you now know why.

Again, it’s nothing personal.  From the photos, we’re sure that Julian Beever’s a very nice guy. He’s got a nice smile and he seems like a hard working fellow.

(If you’ve read this whole post and have no idea who Julian Beever is, here’s a sample photo. Google him for more) 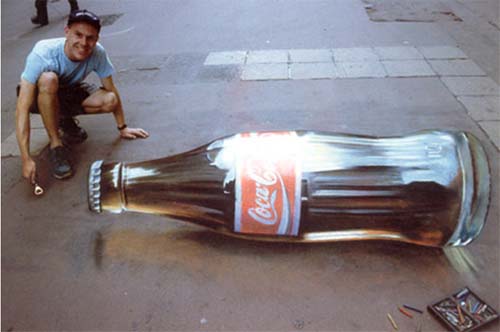