Ammo City
is a London based website that we like a lot. Here’s the first in an ongoing
(but albeit ad hoc) series of Ammo City vs Wooster Collective “reports”. Here’s
the first one, received from Ammo over the weekend:

unless
you’re a contractor of british rail, london underground or whatever else they’re
now called under the governments pfi schemes, redecorating the livery of the
nations trains is regarded as an illegal activity with successful prosecutions
leading to custodial sentences at her majesty’s pleasure. so bringing together
an ensemble of “true uk train art outlaw’s” as dreph calls them in a public show
that pay’s homage to both the nyc and british scene for painting trains has been
a considerable feat.

/>included in the show are submissions from coma, fume, kis42, dsia, rio2, skam,
oker, elk, rateach, siege, cept, spy, mace, fuel, prime, hate, neas, pic and, of
course, dreph himself. presumably given lack of sponsorship from the likes of
virgin trains (although it can only be a matter of time) and possibly some legal
issues each of the artists were provided with a plastic miniature subway train,
the brainchild of, drastic plastics, klim kozinevich upon which to use as their
canvas for the exhibit.

The results along with large exhibits,
photography and background stories make this a unique and high quality event not
just for graf enthusiasts and advertising executives seeking youth credentials
but for anyone seeking an appreciation and an insight into the underworld of the
urban expressionists. 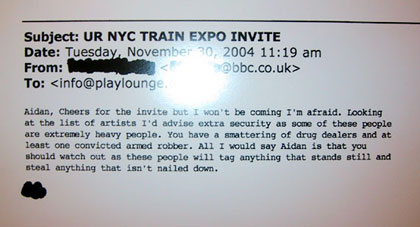