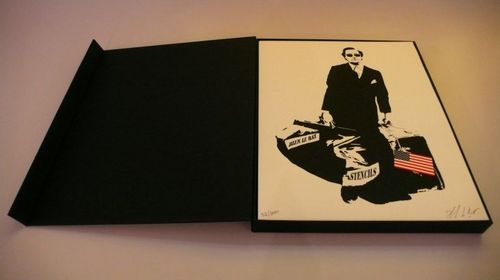 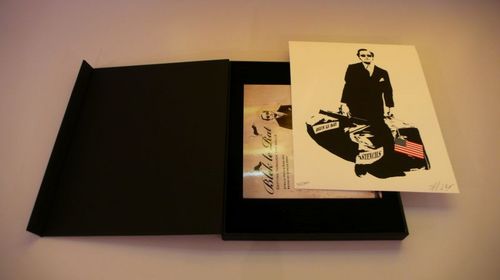 If you’ve been reading the site for a while you know that we’re huge fans of Blek Le Rat. At 66, Blek has played a seminal role in the rise of the urban art movement since the early 1980’s. To this day Blek continues to influence artists from around the world.

A few months back when we received an advance copy of Blek’s new book “Getting Through the Walls” we knew immediately that we wanted to do a Wooster Special Edition. Edited by Blek’s wife Sybille Prou and King Adz, the photos in the book are spectacular.

So for what is by far our most elaborately produced Wooster Special Edition to date, we combined the the new book with an exclusive limited edition print of Blek’s iconic image The Man Who Walks Though Walls, and placed them in a beautifully hand stamped box velvet box which makes this edition very special.

When we asked Blek about the Man Who Walks Though Walls, this was his response:

Wooster Collective: The man is you, correct?

Blek: Yes, it’s me. The first time I pasted that image was during a trip to London in 2004.  Putting the image up on the streets of London was a way for me to say to Banksy, “I have arrived.”  That’s why the man has the suitcases in the image.  It’s me as the traveller.  It represents that experience of arriving at a new city that you don’t know but are open to discover.  After this time in London, i started using this image in new cities that I would travel to everywhere in the world. 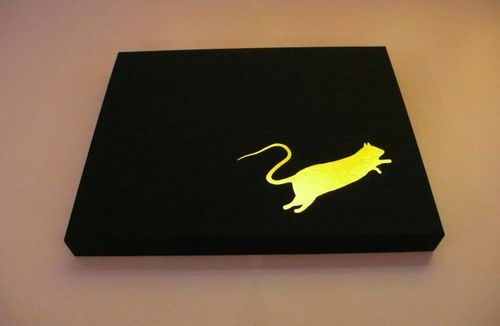 Our Man Who Walks Through Walls Special Edition with Blek Le Rat is signed and numbered.

Getting Through the Walls
128 page paperback
300 illustrations, 290 in color
Sybille Prou and King Adz