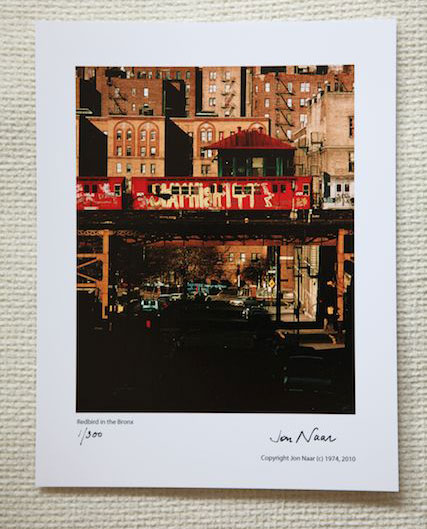 We’re proud to announce that legendary photographer Jon Naar is the latest artist to participate in our “Wooster Special Edition” project. This new project follows sold out editions from such artists as Faile, Shepard Fairey, Space Invader, BAST, and Darius and Downey.

Most often when we ask a graffiti or street artist what their favorite book is, inevitably the answer will be: The Faith Of Graffiti

Published 35 years ago, The Faith Of Graffiti, is a meditation of tags, marks, concrete and trains. Legendary photographer Jon Naar captured a moment in history with the eye of a outsider combined with the precision of an architecture and design photographer.  Norman Mailer wrote a text that is perhaps more relevant today than ever before.

To celebrate the re-release of Faith Of Graffiti, Wooster Collective worked with Jon Naar to create an exclusive print in a numbered edition of 300.  The “Wooster Collective Special Edition” includes both the signed print and a signed book.

“This new edition of The Faith of Graffiti, the first in more than three decades, brings this vibrant work—the seminal document on the origins of street art—to contemporary readers. Photographer Jon Naar has enhanced the original with thirty-two pages of additional photographs that are new to this edition, along with an afterword in which he reflects on the project and the meaning it has taken on in the intervening decades.”