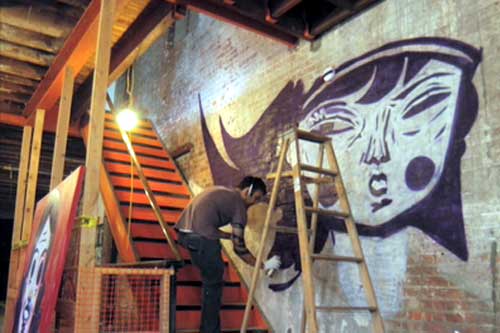 One of the pleasant surprises during the seven weeks that we had to put together the Wooster on Spring show was receiving a phone call from our friend Jake Dobkin back in November.  Jake called us because that week he was hosting a panel discussion and demonstration with the Brazilian graffiti artist Speto as part of the Bi-Fold events put on by LVHRD.

When we spoke, Jake mentioned that Speto was interested in doing a piece inside 11 Spring.  The timing could not have been more perfect,as Sara and I had just been talking about our concern that the show wasn’t yet showcasing any examples of graffiti or street art in the South American style.  Having Speto become part of Wooster on Spring was music to our ears.

So one afternoon Sara let Speto into 11 Spring just before he had to head to the airport. In an hour or two he finished his piece and headed off to the airport.

There’s a lot of things that we like about Speto’s piece. For one, we knew that it was a tricky location next to the staircase. A lot of artists would perhaps turn down the spot, but Speto approached it with passion.

The thing that stands out most for us about the piece is how Speto uses the hair to draw people up and down the staircase.  The way the hair flows and extends to the next floor captured for us quite well how graffiti and street artists have the ability to quickly adapt to their surroundings and incorporate the “realities” of their environment into their work.

Unknown to us until this morning,  LVHRD did a time lapse video of Speto’s work while he was in New York.  The piece he did for 11 Spring comes near the end.  You can watch it by clicking here.