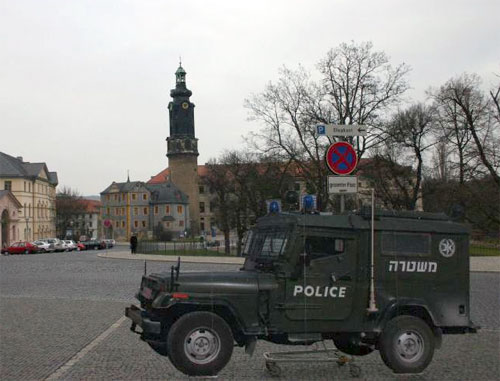 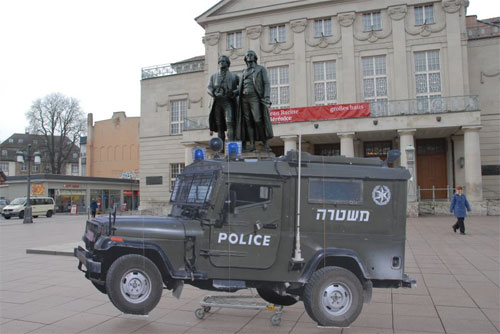 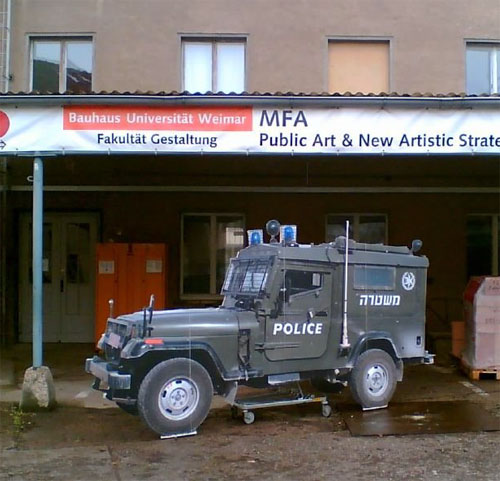 “I wanted to bring The Israeli border police in Weimar, the standard armored jeep that the border police uses to patrol will escort me in my daily life in town. I examine what such an action brings, how the presence of a militarized police force from Israel in a small quiet East German place would be perceived. Would it produce fear, antagonism, discomfort or maybe understanding and sympathy? The site of the Star of David is never neutral on the streets of Germany, all the more so when it is painted on an armored jeep. Not surprisingly, I could not bring a real jeep to Weimar. Instead, I built a two- dimensional life size cut out (like the fake police cars that deter driver from speeding). The cutout can do the same job that a real jeep can do and invoke the discussion I would like to create. Some people might recognize the jeep as an Israeli border police; others, who are less familiar with the situation in Israel/Palestine might not have any reference and not know the origin of the jeep. But all will recognize that it is a militarized jeep. This fake militarized jeep, I feel, will also bring another useful element to the discussion. The fake jeep, the two-dimensional façade barley standing on its wooden frame, is very much like the fake façades of Weimar’s historic building. The façades, historical manipulations, and the cultural cloning wish to suggest authenticity, but they do have to be really convincing to fulfill their purpose and to create in Weimar the romantic Disneyland of the east. In the same way, security can work as a façade. It does not really have to be convincing, you don’t need expensive systems, trained personnel, intelligence, and expertise. What is needed is a pretense of security, feeling of security, the knowing of its being and the statement that it is present.”...  Ronen