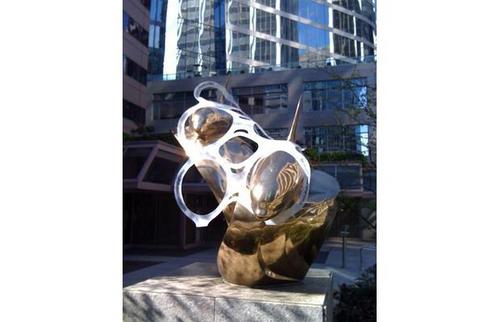 From The Province: “Activists have entangled two sculpted porpoises in a giant plastic six-pack ring to protest the use of throwaway plastic and its impact on West Coast marine and wildlife.

The downtown Vancouver demonstration has been organized by the Plastic Pollution Coalition (PPC) and Vancouver advertising agency Rethink. The PPC is trying to draw attention to the fact that plastic pollution covers millions of square kilometres of ocean in the North Pacific and in the North Atlantic. Scientists expect to find similar accumulation areas in the remaining oceanic gyres. There is no known way to clean up the plastic pollution in the oceans as the plastic particles are very small and circulate throughout the entire water column.

The giant plastic rings were originally set up to strangle a wildlife statue at Georgia and Thurlow, but a building manager at that site asked the organizers to move their protest elsewhere. The environmentalists have since set up their exhibit in front of the Scotiabank building at Pender and Burrard.”