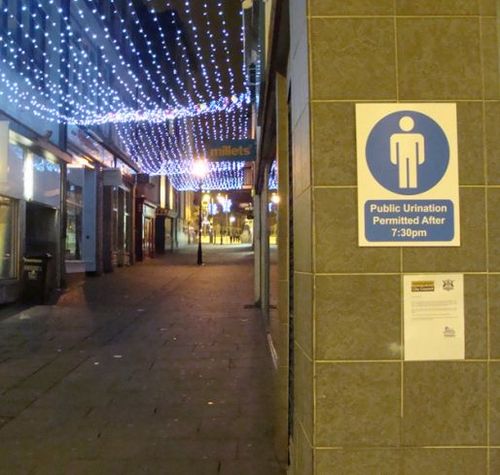 An anonymous female artist called Questionmarc has been causing a bit of a stir in Nottingham over the last couple of weeks in an attempt to highlight some ignored issues in the city.

People should ignore signs telling them that it is legal to urinate in certain public places in Nottingham, the city council said.

The signs, which were put up by pranksters in and around Nottingham, are designed to look official.

They feature a toilet sign and include the words: “Public Urination Permitted After 7.30pm”.

Nottingham City Council is now urging the public to ignore the notices as it sets about removing them.

The prank also featured a laminated note, headed with the logo of Nottingham City Council, which said the scheme was aimed at reducing the mess faced by residents outside their homes.

A spokeswoman for the authority said: “It is an offence to urinate in public and these signs have been put up illegally, for whatever reason.

“We would urge people to ignore them, otherwise they could find themselves inadvertently facing a prosecution.

“We are taking the signs down as quickly as possible and if anyone spots one of the illegal signs we ask them to please contact the city council so they can be removed.”

The notice reads: “In an attempt to reduce late night public nuisance, during the holiday period, Nottingham City Council has designated several public urination areas across the city.

“This urination area will be cleaned daily between the hours of 5am and 6am.” 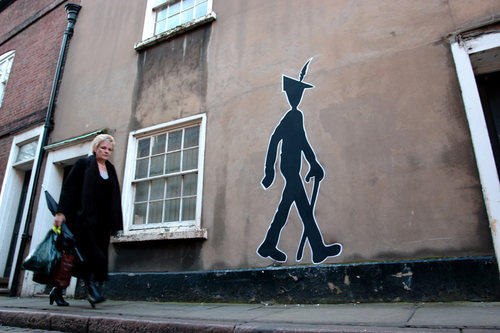 A GRAFFITI artist has called into question Nottingham’s love for the legend Robin Hood.

A silhouette of Robin Hood, complete with a walking stick, has appeared just yards away from the statue in his honour near Nottingham Castle.

The artist has also penned a poem inspired by the closure of The Tales of Robin Hood tourist attraction.

Both have appeared on the side and front of a building next to the Lace Centre, in Castle Gate.

The artist behind the graffiti is claiming to be ‘Questionmarc’ –- the same person who last month put up official-looking signs in Nottingham stating that public urination was permitted.

On a dedicated website, called www.questionmarc.co.uk, the artist explained the reasoning for the latest stunt.

Questionmarc, who is thought to be a woman, said: “Visit Nottingham where you can look at a castle that’s not really a castle, stand outside museums that shut down years ago and have your picture taken with a broken statue of Robin Hood.”

The poem, entitled ‘Robin Who?’ reads: “Nottingham, Nottingham how we love thee.

The land of legends and mystery.

But the pilgrims here have nothing to see.

No Robin Hood and nowhere to pee.”

In a recorded message to the Evening Post, Questionmarc, warned that she “will be back”.

She said the signs – which appeared around the city before Christmas – were a reminder that there were so many pubs in Nottingham but no toilets after closing time. She also called into question the use of longer licensing hours.

The signs which were put up last month displayed a male toilet logo with text saying “Public urination permitted after 7.30pm.”

They were accompanied by an official-looking, laminated letter in Nottingham City Council-headed paper which claimed the urination points were an “attempt to reduce late-night nuisance during the holiday period” and “address the growing problem of householders having to clean up after late-night revellers.”

Nottingham City Council warned it was an offence to urinate in public.