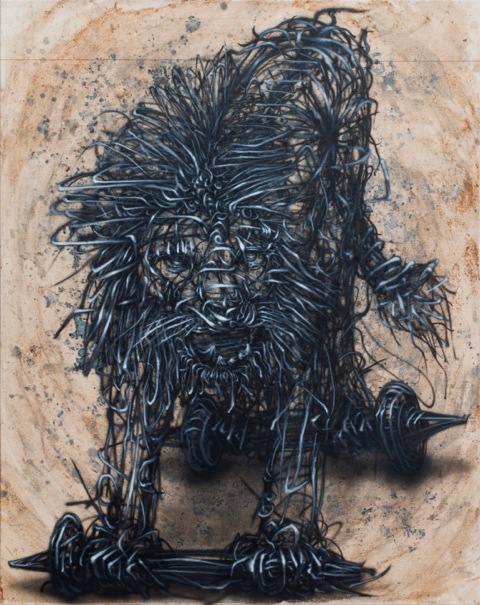 Hybrid Thinking brings together six preeminent emerging artists from around the world and for some it will mark their first exhibition in New York. The show features work by: Dal, from Beijing, China (now based in Cape Town, South Africa); Herakut, a duo based in Frankfurt, Germany; Hyuro, from Buenos Aires, Argentina, currently based in Valencia, Spain; Roa, based in Belgium; Sit, from the Netherlands; and Vinz, born and based in Valencia, Spain.

With a wide array of discipline, medium, style and cultural influence, work by the six artists in this exhibition is thematically cohesive in its related subject matter—through figurative pairings of human and animal elements, the artists explore concepts of instinct, identity and metamorphoses. In the curators’ words: “Hybrid Thinking refers to the current zeitgeist of our time: disparate cultures coming together to create something completely new. Though from distinctly different cultural backgrounds, these artists share an understanding of our cities, of the human condition and our complex relationship with nature.”

Dal was born in Beijing, China in 1984 and is currently based in Cape Town, South Africa. He studied sculpture at the Institute of Fine Arts. The tactile quality of his three-dimensional work is complimented by the gestural approach and ribbon-like structure of forms in his works on canvas.

Herakut is the collaboration between Hera and Akut, a duo based in Frankfurt, Germany. Their work, in itself, is a hybrid of two styles. Hera’s traditional art training combined with Akut’s years of graffiti experience results in an intriguing combination of organic line and form.

Hyuro, born in Buenos Aires, Argentina, in 1974, is currently based in Valencia, Spain. She has an art degree from Escuela Nacional Manuel Belgrano in Buenos Aires, and a Master degree from Politecnic University in Valencia. Her black and white imagery is striking in its poetic simplicity yet rich in existential concepts, the work translates gracefully from canvas to mural form.

Roa is originally from Belgium. His large-scale black and white murals of animals can be found in cities throughout Europe and the US. His gallery work is often painted on multiple panels or objects, echoing the effect and imaginative placement of his images painted on public architecture.

Sit, born in 1976, lives and works in Amsterdam. In his NOIR series, he examines the troubled relationship between mankind and the animal kingdom through a bold black and white palette. Sensual textures of fur and feathers are rendered in dark brush strokes in contrast with pale, soft skin tones of female nude figures and the rigid bone of animal skulls.

Vinz was born in 1979 in Valencia, Spain, where he is currently based. He paints animal heads on large-scale photographs of human figures, and applies the work using wheatpaste to city walls. Taking a similar approach to his studio work, the artist collages paper ephemera into a background texture which he prints figures onto, then paints heads and other details in enamel or gouache.