One of the lessons about putting on Wooster on Spring was that we did without any press releases, no flyers, no ads, no nothing.  Sure the New York Times piece was massive, but even that came from a simple phone call to a friend.  The video postcard above was the type of thing that people did on their own to get the work out in their own way using new techologies like youtube, flickr, and blogs.  This video was made by a friend of Sara and mine named Nicholas Georgiou. Nick is the guy who created the Android sculpture that you saw when you walked up the stairs. 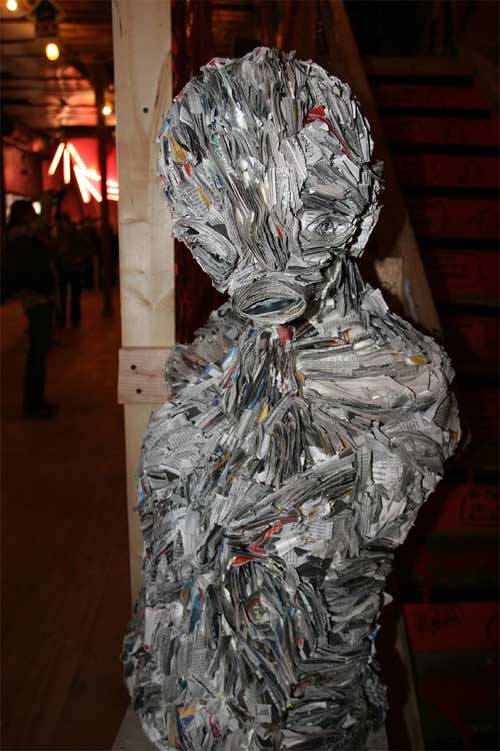 How Nick became a part of the show (and we’re glad he did!) was that he was so blown away by what was going on outside on the building when he would walk past it in the weeks leading up to thew opening, that he was inspired to create his own work of art not for the show but for himself. Over the next few days he created the android made out of newspaper with that creative energy that was building inside him.

To show Sara and I what he had done, Nick took some photos of his sculpture outside the building and then emailed them to us just for us to check out. I think it was a sort of “thank you”.

We loved Nick’s sculpture so much that we told him that we wanted to include it in the show. I think Nick was a bit shocked but also delighted as he’s a true artist who just needs a larger outlet to show his brilliance.  So he brought the android over that day and we placed it next to the stairs.

To illustrate how committed artists are, Sara told me a story the other night.  Hours before we were set to open the doors of 11 Spring for the first time, Nick came into the building and began stitching more small pieces of newspaper into the back of his android sculpture.  It was in a place that nobody would ever see. Sara looked at Nick and said something to the effect of - “Are you crazy?  Why are you still working on this? We’ve got to get out of here soon”  But Nick had to complete this one last touch. It was important to him.  What Sara realized he was doing was stitching small pieces of newspaper that had came from the New York Times article about Wooster on Spring that had hit the newsstands earlier that day.

Would anyone see or notice it?

Was it important for Nick to make sure as an artist that it was there?

And because of that, Sara gave him all of the time he needed.