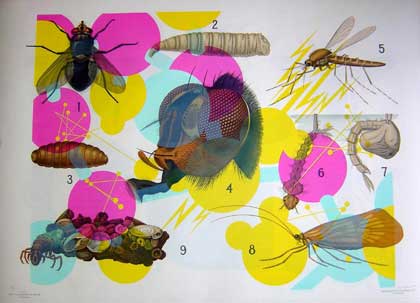 />
Amongst the photos we received from href="http://www.picturesonwalls.com/ghetto">Santa’s Ghetto in London, were
a few that showed a new series of silkscreens by one of our favorite designers,
Paul Insect.  Each one is incredibly detailed so the photos above don’t really
give them justice.  We asked Paul to tell us a bit about them and here’s what he
said:

I’ve always had a massive fascination with anything
medical and scientific!! truly wonderful graphic imagery!... and especially
anatomical posters which I have been collecting for years… I’m not talking
modern versions but original pieces from the 40’s-60’s from around the world!
(painted canvas rolls and paper versions) Which I now have a huge collection
of!. For this years ghetto I took the same approach as last year (over printing
found objects / ie : old shooting targets I did last year (its all about
recycling) where I would find objects to work over and screen print onto, and on
a trip to Sweden back in the summer I met with an 80 year old lady who had back
in the 60’s collected 4 plan chests full of un-trimmed 1950’s anatomical posters
from a closing printers (which she had kept stored in her cellar for all that
time!!!... ) I flew back a couple of weeks later to pick up as many as I could
carry back!! So this was the basis of the new work.  I photographed vintage
molecular models I also have in my collection and then have worked those up as
bold graphic illustrations and with the help of graffiti artist EINE we spent a
weekend over printing the 140 posters I had managed to carry back from Sweden!.

If you like them as much as we do, href="http://www.insect.co.uk">let Paul know.