Today we continue our “Wooster Rountable” where we ask a group of people to weigh in on a single question.  This week’s question is:

IF YOU WERE GIVEN A $20 MILLION FUND TO SPEND ON PUBLIC ARTS PROGRAMS IN YOUR CITY, WHAT WOULD YOU DO WITH THE MONEY? 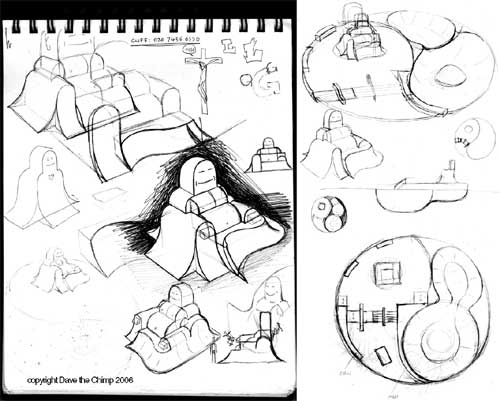 If I was given this amount of money to make Public Art, I wouldn’t make art. That would be disgusting. That is 11.4 million Pounds!!! There are so many problems in this country (the UK) that if £11 million of public money was spent on something as useless as art there would be a civil war!! Though, saying that, we’ve probably spent £11 BILLION on this bogus war in Iraq, and the Houses of Parliament still haven’t been blown up, so I guess no one would even notice.

I think art has the power to change lives, but as soon as large amounts of public funds are spent on it, ideas have to be put through committees, and the ideas get watered down until the very things that make art exciting and powerful are lost. Money has the power to ruin anything, and the more money, the more things get fucked.

So here’s my solution - make art that is functional. In this case, art that is skateable. Art that keeps kids out of trouble, that keeps them fit, maybe even keeps them aware, balanced, spiritual? It’s worth a try. So ladies and gentleman, I present “Chimp’s Buddha Skatepark”. A giant concrete circle, that incorporates inter-locking bowls and a street areas, which itself features a giant rideable sculpture of Buddha. The street area is smooth black tarmac with a white marble Buddha, the bowls are white concrete with a black speed bump in the largest bowl, so that when viewed from above the park is a giant ying/yang symbol.

This would only cost around half a million to build, so let’s make them for all the major religions in London - Star of David shaped ramps, snake runs which say “Allah” in Islamic script when viewed from above, huge indoor parks built in Christian churches, etc etc. Let’s unite all religions through skateboarding and art, and hope that mankind will one day realise there is only one true and ultimate power, and it makes no difference what you call it - God, Allah, Buddha - IT’S ALL THE SAME THING!!! And until we stop fighting over which interpretation of this power is correct, we’ll never be at peace and we’ll never become one with the power again.

If anyone has a few million and wants to build this skatepark, you can reach me through the Wooster cats. I don’t need paying, I just want to ride this park!!

Here is my idea for the 20 million project…. it would be nuts to waste that much money on street art that would be sinful…. BUT if you could provide fold up shelters for homeless people AND do some art on them then I think it would be a worthwhile project…..so I suggest making 10,000’s of these shelters out of durable corrugated plastic or something and then just dropping them in all the urban centres and letting people use them as they see fit….. and 100’s of artists could decorate them so they would be very jolly.

It would give rise to global street art shanty towns… i think this is a good idea…If the STREET SHELTER owner found a permanent home then they could sell their temporary shelter and make a few bucks…..

Can I have the 20 million now please? and I’ll start fabricating and get my pals to get painting…

I think the money’d be spent to build a structure in wich there are laboratories of different type for different kind of arts and tecniques. A structure with also an expositon place for organaizing shows.

This laboratory should be placed in a big city and the direction of this place should choice every three months a number of street artists ( about 10: the laboratory should have a place for sleeping and eat the artists for this time). During this three months the street artists ‘d work in a common project for a show in that structure and in particolar to a common project of street art in a city of the world.

But Marc and Sara, if you want we can excape with the money.

If I had 20 million dollars to spend on public arts progams in the city, I would definitely alot a good portion of that to arts education in schools. I find it amazing how limited art and music programs tend to be, at least here in Canada unless you go to a specialized school.  I’d take the rest of the money and give it to local artists, showcase their talent and at the same time beautify some of the more dreary publicly owned monstrosities that occupy the city. Put some money into the pockets of local artists, give something to the community and tourists to look at and give something to up and coming artists to strive for, to be inspired by.  Although beautiful in many ways Montreal can get pretty bleak, especially in the winter time when all of us who didn’t make it down to Cuba could all use a dash of colour in our lives. Not the most original prescription and maybe naive from a bureaucratic perpective but there you go.