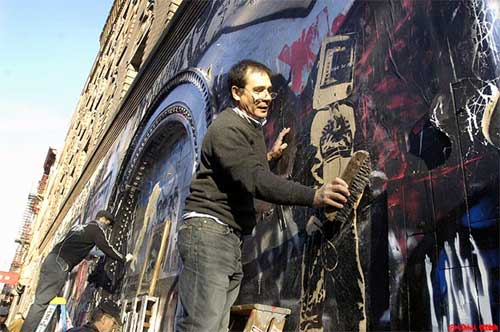 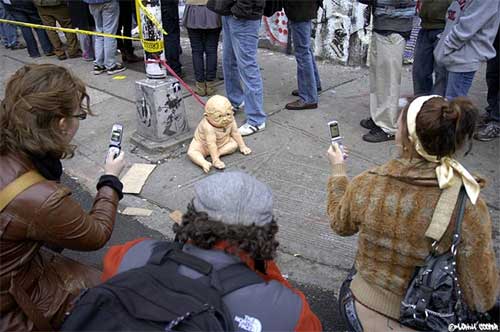 In curating the show, there were two important things for Sara and I.  First was that we respected the past while we looked into the future, and second that we make sure that the exhibition did not only happen inside of the walls of 11 Spring.  The two photos above capture both these qualities. They were taken by the legendary photojournalist Martha Cooper who in the late ‘70’s and early 80’s began documenting the incredible emergence of graffiti in New York city.  Martha spent many days with us at 11 Spring and we can’t wait to see the photos she took. (As an aside, one of the most exciting things for me was to meet Henry Chalfant as it was he and Martha Cooper who in 1984 published the groundbreaking book Subway Art)

The top photo is an important one for us as it came about when Blek Le Rat and I went outside to do a live discussion and demonstration of weatpasting.  As Blek talked about his approach to art on the streets of Paris (pasting politically motivated work next to the offices of the French media) I saw out of the corner of my eye that Martha was shooting. One of my favorite moments was when Blek helped a little girl wheatpaste to the wall one of the small drawings that she had made while waiting for hours and hours on line.

After Blek and I finished our discussion I introduced Blek and Martha and even though they had been central figures in the scene in the early 80’s, they had never met.  As Blek looked at her almost speechless, I left them alone to talk.

I can only imagine the stories that they could share. It was an honor for all of us to be in their presence.