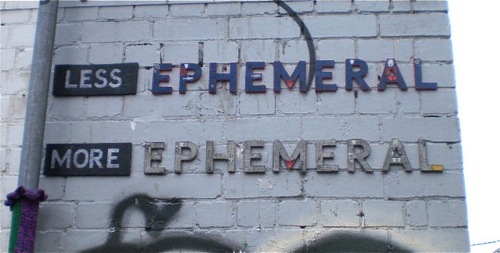 From Phoenix the Street Artist

We have had particularly stormy and wet weather in Melbourne in the last couple of weeks and the signs of deterioration in the lower letters have already begun: 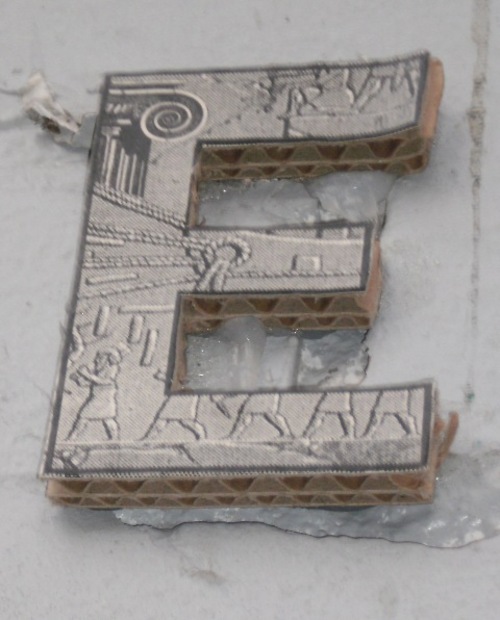 I look forward to the piece literally spelling out its simple message of ephemerality. Weather climatic or human factors degrade or alter this piece, it will be interesting - and within the scope of its original intention.

As an artist who has played with ideas around ephemerality and street art, as in my Little Diver ReSurfaced piece which has twice restored Banksy’s 2003 Little Diver stencil in Central Melbourne with a pasting (see story: http://www.flickr.com/photos/phoenixthestreetartist/sets/72157625212910000/ ), I am fascinated with the rigidity of the position many street artists and street art commentators take towards the natural longevity of public street art.

I understand that an ephemeral presence is a typical situation of much street art - but it seems that some practitioners and commentators view that this therefore defines street art; others, like those who submerged the Little Diver beneath the curtain of silver paint - or who subsequently attacked my restorative pasting - feel a need to somehow enforce ephemerality upon specific works. On the other hand, I have heard many of my fellow street artists express a joy at their works surviving anniversary milestones on the wall.

My approach to virtually everything is to view the potential - and ever-fascinating - dialectic between polar positions. Street art is often ephemeral - and yet it is sometimes far more eternal; it changes - it stays the same. That it may be installed with the intention that it maintains its presence in the public space is just as valid an intention as that intention which says: “It’s not meant to last; it’s meant to be ephemeral.”