By now, many of you may have heard that adidas and Barry McGee are being accused of being “racist” against Asians based on the “Ray Fong” image that appears on a new addidas shoe.  We didn’t post anything about this yet because, quite frankly,  the idea that Barry McGee is racist against Asians is one of the most ludacris things we’ve heard in a long time. And quite frankly, we didn’t want to extend or promote the discussion any further than it has already gone.

But this morning we received an email from Eric Nakamura, the founder of Giant Robot magazine and the stores.  Eric’s thoughts on this issue are spot on, so we thought we’d pass them along to you:

I know Asian Americans rally through emails. It seems like any worthwhile independent project or controversial topic spreads quickly   this way. This is one of them, and honestly, it’s not the most important topic, but it is something that I think you should know.

Yesterday, I received a pair of Ray Fong Adidas. They are truly beautiful shoes. The box, laces, and details are amazing. I doubt a sneaker can get much better. 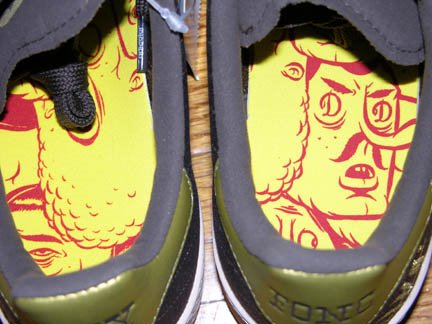 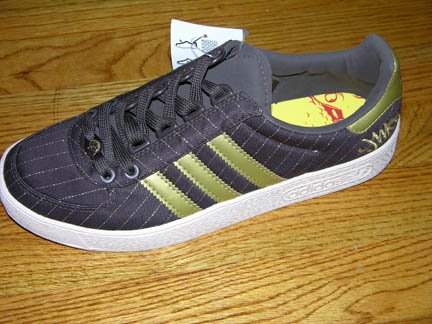 I realize there’s a lot of controversy over the Ray Fong image that appears on this shoe. It’s been on CNN and BBC in addition to the viral emails I mentioned. As a friend of the artist Barry McGee, I feel the need to come forward and address the topic.

I’ve known Barry for nearly ten years, and I can safely say that he isn’t racist. For many of you who are following this controversy, you should know that Barry McGee is half Chinese-American, and has been featured on the cover of Giant Robot magazine multiple times. We were proud to exhibit the work of Ray Fong at our gallery in Los Angeles earlier this year.

Let me try to explain who Barry McGee is.

Coming from a graffiti artist background in San Francisco, Barry has transformed into an important contemporary artist in America. I personally believe that he has taken aspects of modern graffiti,  including bombs, tags, throw-ups, stickering, and scribing, and made them acceptable in the world of fine art. Since his ascension in art,
there have been numerous gallery and museum exhibits highlighting the new genre. The movement is featured in books and magazines around the world. One can also argue that it’s given rise to a new industry in America, which is young contemporary art and many art-related products including designer toys, clothing lines, and, of course,
sneakers. Barry is at the forefront of this, albeit unintentionally.

Making any product is rare for Barry McGee, and the shoe by Adidas should be appreciated as an art object. At $250, it’s obviously intended for a select audience, which may but most likely won’t include you. The image isn’t a joke at anyone’s expense; it’s part of Barry’s artwork. From his own words, the image is actually a no-holds-
barred depiction of himself as a child. This isn’t a racist Abercrombie and Fitch T-shirt or an offensive Adam Carolla broadcast.  Imagery like this is something that’s been done by many respected artists including Kara E. Walker, Kehinde Wiley, James Luna, and Manuel Ocampo. Basically it’s taking negative stereotypical imagery and using them in a proud manner. Barry McGee’s Ray Fong image can be looked at in a similar light, and will undoubtedly outlive us all. It will be placed into permanent collections in museums. It will be written about for years to come. It may eventually be in art history books. I believe that Barry’s art is precious, and an important part of art history.

As an Asian American, I am proud to have Barry McGee as a role model. In the realm of graffiti and street art culture, there are few Asian-American faces involved, and none with Barry’s widespread appeal. He is perhaps the most respected graffiti artist of all, and his audience ranges from broke art kids to billionaire museum
benefactors. Most Asian Americans may not know Barry McGee or appreciate his art (yet), and that’s a shame, but I recognize him as a hero and rank him among the 50 most culturally important Asian Americans.

Lastly, I know that this will eventually boil over and disappear.  Those who hate Adidas for the moment will probably go back and buy a pair of shoes. I was going to let this go away, but after hearing the constant talk and reports of racism associated with Barry McGee, I felt the need to explain the Ray Fong I know. Help spread this side of the story.