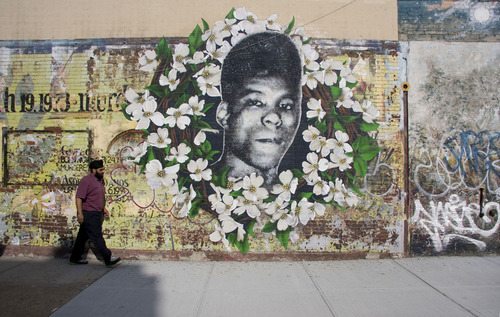 “In the wake of the 22nd anniversary of Yusuf Hawkins’ brutal murder, Gabriel Specter acts to ignite the teen’s memory, once more, in New York City’s collective consciousness.

On August 23, 1989, a racially motivated mob murdered 16-year-old Yusuf Hawkins in Bensonhurst, Brooklyn. A mural in his honor has stood in Bedford-Stuyvesant since then, but years of neglect, vandalism and aging paint have left it unrecognizable. The murder shook modern race relations in New York City and is linked to the undercurrents that sparked the Crown Heights Riots and the election of New York’s first black mayor, David Dinkins.

To honor Yusuf, Specter installed a 14 by 14 foot hand-painted portrait adorned with flowers. The placement maintains former additions by other artists and much of the original wall painted by Brooklyn master-muralist, Floyd Sapp. Often, notes are written to the deceased on memorial walls, over the years, Yusuf’s mural was blanketed with scrawled messages to him and other fallen community members. Specter continues that tradition by adding to the historic wall that is once again revitalized by the memory of Yusuf Hawkins.”