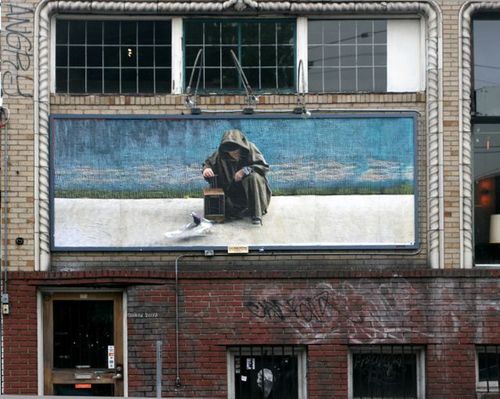 “This mural, created in Seattle by No Touching Ground (NTG), is an extension of the “Catch & Release” performance/poetry project. NTG created a fifty word poem on his desire to fly, where each word was silk screened onto a small scroll and placed within a custom carrying device. These carriers were then affixed to the legs of pigeons.  Allowing each word and poem to create a pure form of transcendence through the Seattle sky.

“The project “Catch & Release” was inspired by Joseph Beuys performance “I like America and America likes me”. I wanted to create a similar dialogue between man and beast. The dove was once seen as a divine messenger, a herald of peace.  In native lore the coyote was viewed as a mighty deity, shifting between physical and spiritual states. Both of these creatures are now largely viewed as nuisances, scapegoats and detriments to society.  I didn’t fully understand the nature of pigeons until I started working with them directly. I quickly came to appreciate their magnificence rather than focus on their imperfections.  Pigeons are graceful, social creatures. They are survivors. They live mainly off free food and occupy marginalized spaces. Pigeons are true bohemians.”


The billboard of No Touching Ground is based off of a portrait taken by photographer Kyle Johnson.