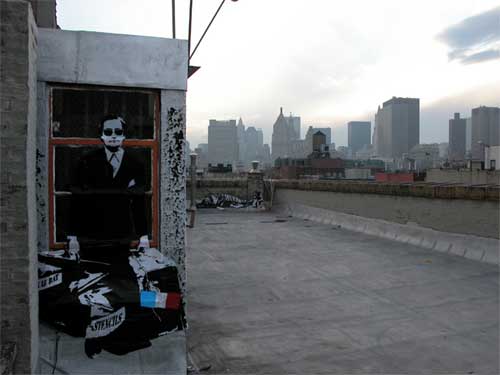 “1981 to 1983 the beginning of the stencil graffiti art .I had the idea to use stencil to make graffiti for one reason. I did not want to imitate the American graffiti that I had seen in NYC in 1971 during a journey I had done over there.I wanted to have my own style in the street… I began to spray some small rats in the streets of Paris because rats are the only wild living animals in cities and only rats will survive when the human race will have disappeared and died out… Blek Le Rat”

The picture above is really important to us. For the last couple of years Sara and I have been speaking with Blek Le Rat about finding the right opportunity to come back to New York.  Wooster on Spring provided not only that opportunity but allowed hundreds of people to share Blek’s warmth and commitment to his art.  At 55 years old, Blek is truly a living legend in the urban art movement.  And to have him stay with Sara and I and to sleep on a rollout bed and then share stories with us over early morning coffee with Bo and Microbo was wonderful.  We already miss him.

(The photo above of the work of Blek Le Rat and was taken on the roof of 11 Spring.  Not many people were given access to the roof, but those that did get up there realized that the building has one of the most amazing views in all of Soho)