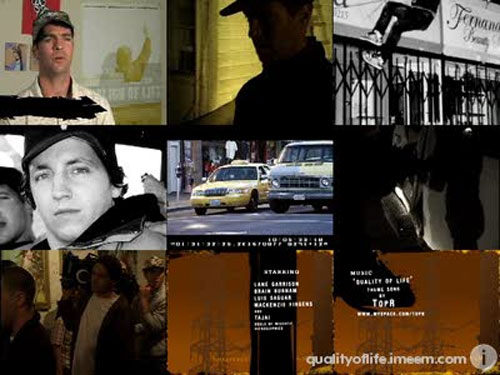 One of the most impressive examples that we’ve ever seen of not only DIY film making, but also of DIY film

, has got to be the self financed and self distributed graffiti film, Quality of Life.

The latest effort from director Benjamin Morgan is a behind-the-scenes video podcast series, Putting the Pieces Together.

Ben writes - “Making Quality of Life was sheer hell. We never had the money to do anything we wanted to do. Every fricking step was a struggle. But we adopted The Graffiti Model to get the shite done. And proved that money doesn’t mean anything, and passion means everything.

This vodcast series is being launched in conjunction with our new book (Soft Skull Press), Putting the Pieces Together: The Graffiti Model for Indie Filmmaking. The goal is to pull back the curtain and tell the story of how we made (and distributed) this film with no money.”

You can check out the video podcasts by clicking here.