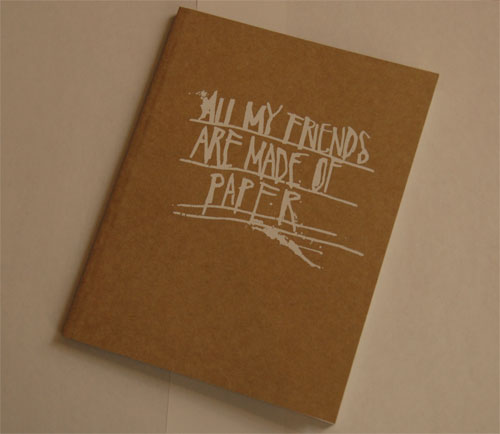 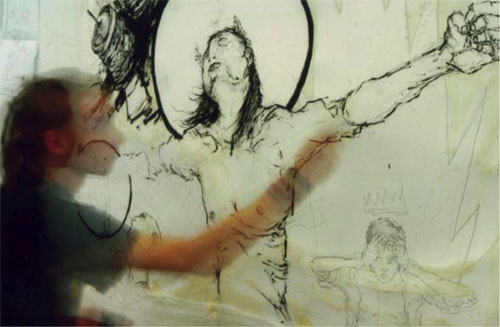 After more than a year in development, we’re extremely pleased and excited to announce the release of “All My Friends Are Made Of Paper” - A Survey of The Work of Armsrock” , the latest limited edition book in our “Wooster On Paper” series.

It was back in October of 2005 when we first learned of the work of Armsrock, an artist originally from Denmark who has been living for the last few years in Bremen, Germany.  In December of 2005, Swoon chose Armsrock as her favorite new artist of that year.  She described Armsrock’s work as “full of magic”. We couldn’t agree with her more.

His work sprouts from fragmentary moments of observation gathered in the raging stream of signals that fills the urban space. He attentively portraits his fellow humans, attempting to capture the stories impersonated in their moving forms. He creates life-size paper portraits of strangers and friends alike, each a complicated and original drawing, to honor the originality and complexity of the human nature.  His artwork is limited to a temporary existence, it is as ephemeral as the encounters on which it is based.

By making hundredths of singular images, each constructed from fragments of reality, processed through sketched lines of black, returned to the streets where he first found them, he attempts to create a vast set of “open sketchbooks”, documenting as many facets of life in the urban society as possible. Showing his admiration for the “real and grim beauty” that houses in every life. He is trying to create a counterweight to the fabricated air-brushed reality created by the commercial imagery invading our visual turf. He uses his work in attempts to understand the world as it unfolds around him.
In choosing who to portrait, he has a clear priority for that part of humanity which is products of our cities, but isn’t granted any space within them. He “steals” space to tell stories that we all know and encounter daily, but which has grown so common that they no longer have any impact on us. By returning every image to the urban space, he conveys a signal of passionate attention. His work is a small disturbance in the rushing current of signals in the streets, a little voice, “asking us for a moment of pause, so that we might pay attention to it too.”

So at the beginning of 2006, Sara and I talked about doing another book in the “Wooster On Paper” series, this time concentrating on the work of a single artist.  When we sat down to come up with a short list of artists, Armsrock was the first name written down by both Sara and I.  Later that night we called Armsrock and invited him to visit us in New York.

A few weeks later, Armsrock arrived at our flat with hundreds and hundreds of photos.  For the next four days we sat together drinking wine, going over images and talking about possible designs and essays.  Once we decided on the type of book we wanted to publish, we called our friends Thundercut and invited them to work with Armsrock on developing the final design of the book.

We’re absolutely thrilled with how the book has come out.  In addition to lots of color photos and essays from Armsrock and Swoon, there’s 16 pages from Armsrock’s sketches.  We hope you like the book as much as we do.  Here are the specs and an exclusive link to purchase it online. 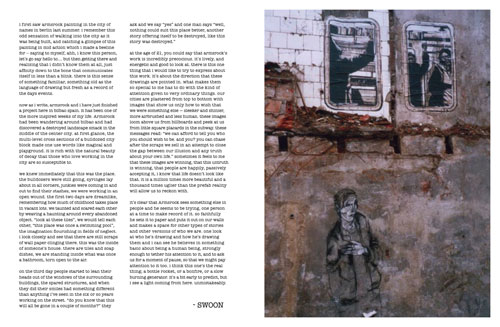 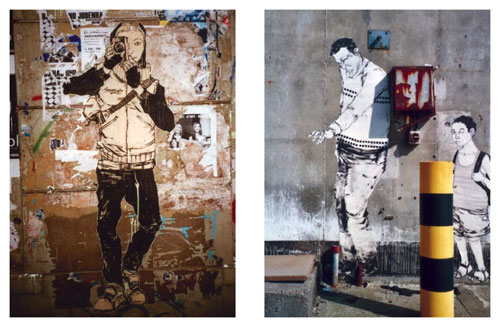 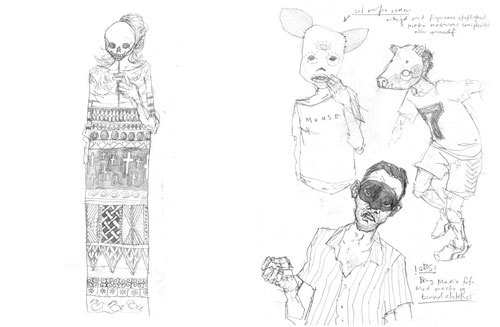