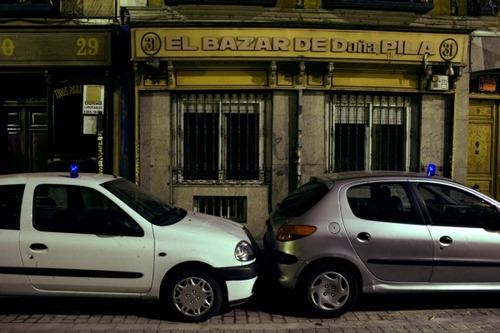 “Police cars everywhere in the Malasaña district. It was surrounded not precisely to shoot a cop film, so has been the situation in the capital lately.

And what was the reason to show these living forces? Well, the 2 de Mayo celebration of course. It is considered a high risk period and has required the setting up of protective fences all around the perimeter of the square. The district’s festival is celebrated here and young people are denied entry if they don’t agree to be searched…

Once recovered from this ‘high risk celebration’, we received the visit from a delegation to assess the sites for the 2016 Olympic Games. We have had the hunch that it must have been rather dangerous, owing to the great number of lot of police cars in the streets in the centre of Madrid.

This stressful coming and going of police cars have made us obsessed with this worrying police car chase, whose symptoms led us to think that any car could be a disguised police car.

We intended to express this paranoia and we made an installation called A lot of Policeman for so few people…, putting on the cars parked around the Dos de Mayo Square our rudimentary blue police lights made with plastic glasses, blue paper and our flashing lights.

We carried out the installation on a total of 50 parked cars, causing no damage whatsoever, on 12 May and there was some expectancy from some lonely nightbirds who waited patiently round the corner for the right moment to take all police lights away for their own use.