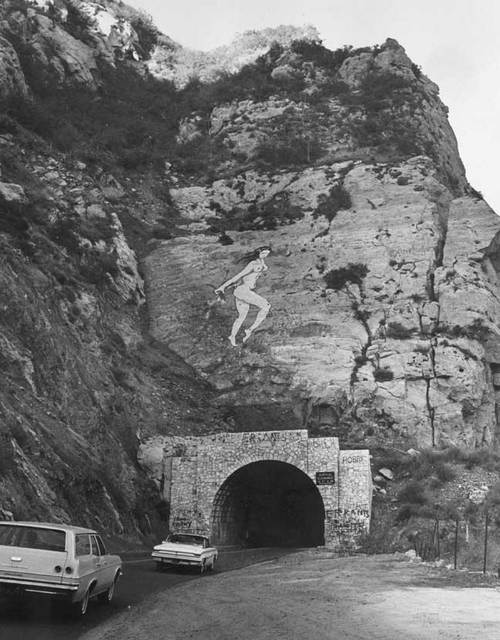 One Saturday morning, on October 29, 1966, a massive 60-foot-tall painting of a nude pink lady holding flowers suddenly appeared as you headed into the tunnel on Malibu Canyon Road.

As word of the massive pink lady spread, and the traffic on the highway grew to a halt, city officials decided “The Pink Lady” had to be removed. Firefighters were called to hosing her off the rocks. It didn’t work. Buckets of paint thinner were thrown on the rocks.  It only made her pink skin pinker.

As county officials worked on figuring out a way to remove The Pink Lady, a 31-year-old paralegal from Northridge, a woman named Lynne Seemayer, suddenly showed up on the road and admitted that she was the artist who did the piece.

Seemayer said that she was annoyed by the graffiti that was all over the canyon wall (“Valley Go Home” was a memorable slogan) and so, over a 10 month period, she started to secretly climb up under the moonlight and suspended herself by ropes to remove the graffiti.

At 8 P. M. on October 28 Seemayer painted the Pink Lady using ordinary house paint. By dawn it was done.

The Pink Lade lasted only a week. Seemayer sued LA county for $1 million for the destruction of her work, and the county counter-sued for $28,000 in removal costs. Since the painting was on private property, both cases were dismissed by the court.

On Thursday, November 3, workers covered the painting with 14 gallons of brown paint. 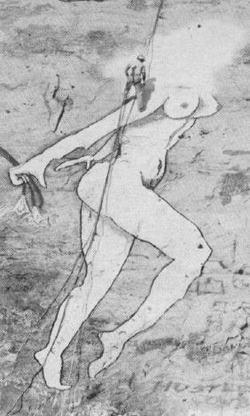 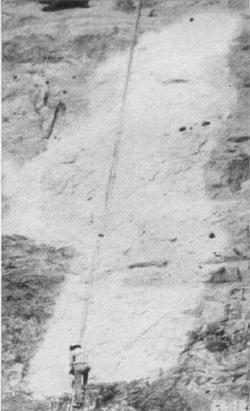