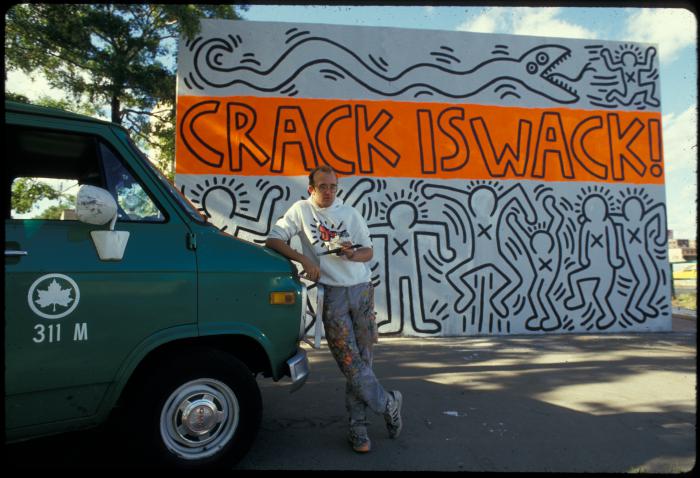 This week the Huffington Post published a fascinating article written by Matthew Israel from Artsy, which tells the inside story of Keith Haring's icon "Crack is Wack" mural in New York City.  Its a great read with some amazing archival photos.  Isreal writes:

How Crack is Wack came to be is not well-known. Nor is the fact that the mural is not the original version.

Benny was one of the major catalysts for Crack is Wack. Benny was Haring's young, gifted studio assistant in the mid-1980s who became addicted to crack. Haring and the rest of his studio were close with him and they tried everything to help him kick his addiction. This was, according to Haring, an incredibly distressing experience for everyone involved. Benny had no health insurance, so they initially called cocaine hotlines and Benny started to see a counselor, but that didn't work. Haring's studio also went to emergency rooms to try to get him into a guided program, but no hospital would take him.

Around this time, Haring often drove past a handball court located in a small park near the Harlem River Drive. The court was clearly visible from the highway but abandoned. Nothing fenced in the court and no one played on it (because if you did, the ball would just go onto the highway). According to Haring, the location seemed a perfect spot to paint. It was almost identical to a highway billboard.

The subject for the painting quickly became crack. (In Haring's words, "Inspired by Benny [who was eventually cured], and appalled by what was happening in the country, but especially New York, and seeing the slow reaction (as usual) of the government to respond, I decided I had to do an anti-crack painting.")

Check it out the full article here.