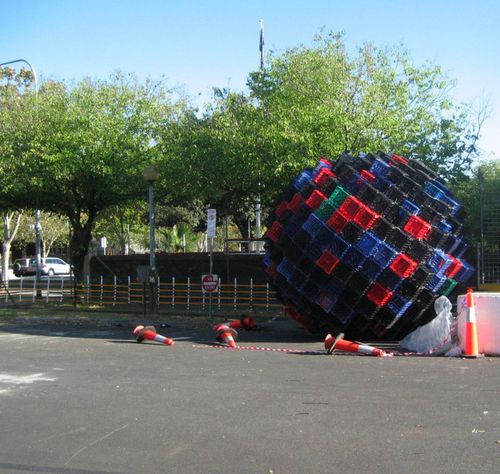 “The Adelaide Fringe Festival commissioned us to design a float for their opening night parade, based on some of the work we have been doing with milk crates, and in particular the idea of ‘crateman’.

We were reluctant however to simply relocate our street based work into a radically different arena. Instead we were interested in the idea of a parade as being a cross between performance art, sculpture, and audience participation.

The crate sphere was designed to be rolled down the street as the final act in the parade. Comprising of 688 milk crates and being over 4.5 meters high, it had an estimated weight of over 700 kilograms. It was hoped that upon seeing us struggle with the beast, members of the audience would join in, and help us roll the sphere to a glorious end!

Unfortunately the reality was somewhat different.

People in their curiosity came closer and closer to the ball - but were reluctant to get involved and help, or move out of its way when it threatened to crush them. Our cries of distress were misinterpreted as part of the ‘theatre’ of the situation, as we struggled to maintain control. After completing about a quarter of the parade route, the organizers and the police decided to pull the plug, and ordered us to stop the ball.

It was rolled to the side of the street, and left to sit in a ‘no parking’ zone. Here it sat for a day or so, puzzling passers by, a strange visitor to the quaint streets of Adelaide.”