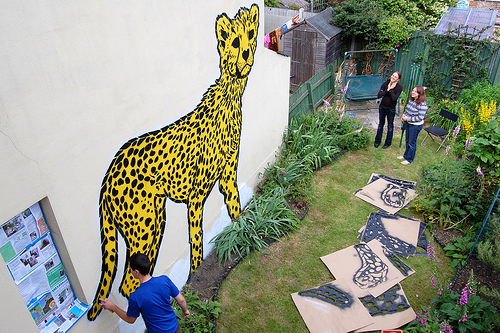 A terrific little story sent to us by Jody in London:

“A few weeks ago I went to the Cans Festival in London, I took a few pictures and put them on Flickr, including some work by Minneapolis graff artist, Broken Crow.

A day or so later, Broken Crow added some of my photos to his Flickr favorites, so I dropped him a Flickrmail, telling him how much I enjoyed the show and jokingly suggested that if he’s ever in London again and needs a wall to paint, then he’s welcome to paint my house.

Broken Crow asked me to send him a photo of my wall, said it was perfect and that he had a spare day between visiting relatives in London and painting some commissions in Paris. Three weeks later he’s here, in my garden, with his fiancee, painting a 12x15ft mural of a cheetah.

We had a great day - the weather was perfect and I can’t quite believe it happened. Proof that not all friendships made over the internet end in vampire worship and ritual suicide!

Huge thanks to Broken Crow and his fiancee - the nicest strangers I’ve ever met. The wall was painted on June 14, 2008.”