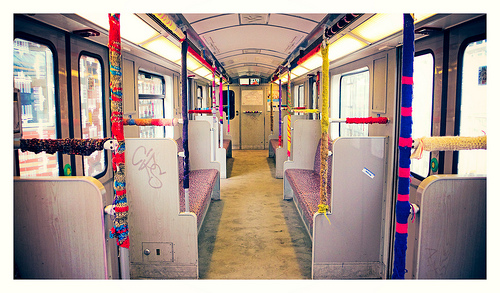 “A group of Guerilla Knitters which I am part of have recently (31 January to be precise) stormed the U1 in Berlin disguised with knitted beards and armed with knitted cozies, to beautify and soften the harsh interior of the everyday world of commuters. After 3 months of preparation with my Stitch N Bitch group, it took us just an hour to install, and the carriage stayed in circulation until around 15:00, when the BVG security unfortunately cut it all to pieces. Despite making those few employees miserable by giving them extra work, I think we cheered up a fair amount of weary travellers on a gloomy January day!”