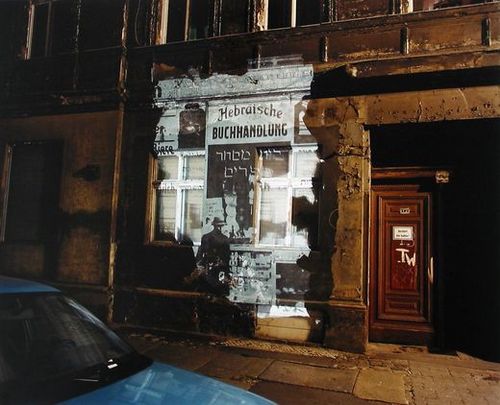 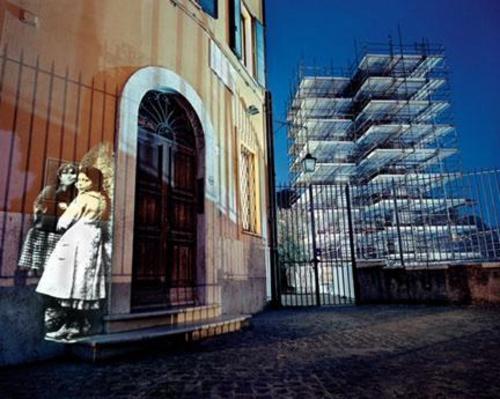 “Concerned with questions of memory, place, and identity, Shimon Attie gives visual form to both personal and collective memories by introducing histories of marginalized and forgotten communities into the physical landscape of the present. The Writing on the Wall project (1991-1993) took place in Berlin’s former Jewish quarter, the Scheunenviertel neighborhood. There Attie projected slides made from pre-Holocaust photographs of the neighborhood’s Jewish residents and shops in the same (or sometimes nearby) locations where the original images were taken. He then photographed the resulting scene. A woman from the past looks out the window of a building now scrawled with graffiti. A pigeon shop with cages stacked on the sidewalk is restored to an otherwise empty street. The life and industry suggested in the projections of the past strike an unexpected counterpoint to the crumbling facades and apparently abandoned places of the present.

Using modern Rome as his backdrop, in The History of Another (2001-2002), Attie projected fragments of historical photographs of Roman Jews onto the city’s ruins and excavation sites. The resulting pictures conflate three distinct historical moments, that of ancient Rome, Roman Jews at the turn of the century, and modern Rome with its new construction and continual efforts to conserve relics of the past. By projecting historical photographs onto ruins and also including in his frame elements of contemporary Rome, Attie creates an environment in which time becomes visible and compressed rather than invisible and expanding, like our normal perception of time. Dividing our attention carefully between three moments in the human history of this place, he implies that history might not have anything to do with time, but might be better thought of as a continuous, repetitious loop that contains both stone ruins and, less tangible, human presence.

Born in Los Angeles in 1957, Shimon Attie lived in Europe for seven years before moving to New York in the fall of 1997. He has exhibited widely in both the United States and Europe, including shows at the Institute of Contemporary Art, London; the Centre Georges Pompidou, Paris; and the Museum of Modern Art, New York. His work is held in the permanent collections of the Museum of Modern Art, New York; the Berlinische Galerie, Berlin; and the Jewish Museum, New York.”

Photos and text nicked from the website of the Museum of Contemporary Photography in Chicago.