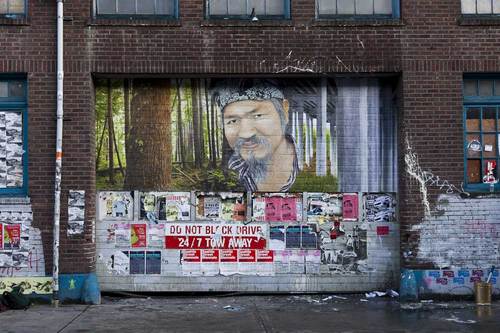 From No Touching Ground:

“On August 30th Seattle resident John T. Williams was shot and killed by a police officer seemingly for possessing a carving knife. Williams was a seventh generation Ditidaht totem carver.  In addition to his carving knife, which was within legal limits for blade length, Williams was carrying a piece of wood. He was also deaf in one ear, and partially crippled. Witnesses stated that he didn’t seem to understand when the officer told him to drop the knife, and that there was nothing aggressive or violent about Williams’ behavior. John T. Williams was shot in the back and side, his carving knife was found shut beside him, challenging the officers testimony that Williams had lunged at him with an open blade.  The investigation is on going.

Seattle street artist No Touching Ground uses narrative images to write the natural world back into the urban landscape. This mural is but one chapter of a larger series the artist has created as part of the conversation on social justice in Seattle. The John T. Williams piece is more than a metaphor, it is a memorial, dedicated to those caught between conflicting worlds, living fully in neither. “