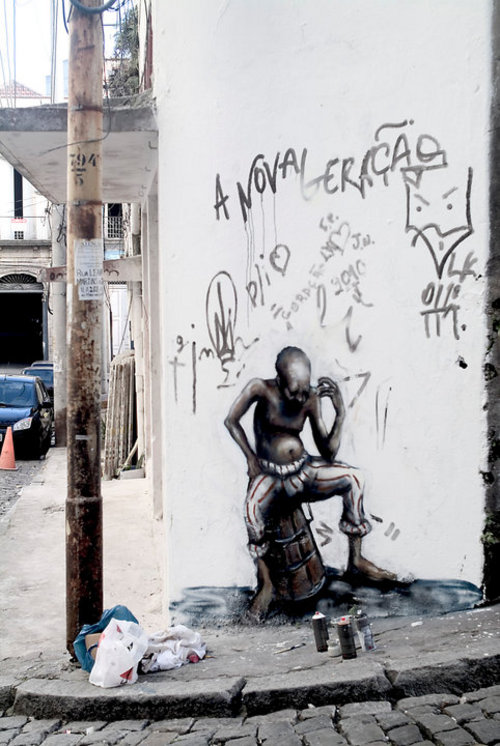 “The images above are part of a project that I developed at my hometown, related to my research at the University of the State of Rio (UERJ). It consists in several human scale representations of people that could have lived in the place that I painted them.  The location I chose, o Morro da Conceição, is a Collin in the downtown of Rio, just beside the great agitation of the day-by-day of the city. However, it’s a very particular area, as it seems more like a little town hidden by the concrete walls than just a part of the center. It’s one of the oldest habitation areas of Rio, and one of the few that kept the city’s ancient structure, with old houses and narrow streets - it had also a slave market and a slave port until the 19th century and at the beginning of the 20th it was meeting point for many musicians at the begging of samba era. But weirdly, in spite of all this history the place is not well know for most of the cariocas, probably due to the Brazilian habitude of not giving so much value to its own past. For someone who’s walking by the downtown and enters this area it’s like being transported to a different city layer, knowing such a thing I decided to paint this figures as if I could make a mixture of the day-by-day of the past with the present one. So it’s a project about the remembering and the forgetting in a city, and how the past can be imagined today, or how a place can induce us to image this past. I painted during the afternoon so I also had the chance to develop the idea in interaction with the local habitants, who gave suggestions and their opinions about the paintings, or shared their ideas about anything.”...  Vanessa