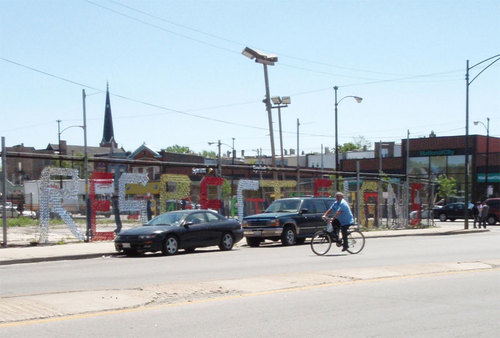 Alicia Coria and two of her sons, Ivan Castro, 8, and Diego Castro, 10, never had a chance. As they crossed North Avenue at Kimball one afternoon last October, an 87-year-old driver lost control of his car, ran a red light and slammed into the mother and her children, killing them all.

On May 14, a makeshift memorial to Stowe Elementary School students Ivan and Diego Castro and their mother, Alicia Coria, gave way to this more permanent remembrance.

The accident, which shocked the entire city, was particularly devastating for students and teachers at nearby Stowe Elementary School, which Ivan and Diego attended. To express their grief and affection for the family, the students and others almost immediately assembled a community shrine of flowers and candles at the Humboldt Park intersection and maintained it until earlier this year.

But on May 14, that temporary memorial gave way to a more permanent remembrance of the two boys and their mother and the circumstances under which they died. Stowe third graders, under the tutelage of artists Mike Bancroft and Anthony Marcos Rea, installed a portable mural they had created. The mural’s imagery incorporates silhouettes of children, the mother holding her two children, and verbiage in Spanish and English that says “respect signs,” an admonition to motorists to obey traffic signals.

The community art project was spearheaded by Stowe Principal Dr. Charles Kyle, teachers Nellie Windsor and Juan Fernandez, and Bancroft and Rea, who are artists-in-residence at Stowe under a project of the School Engagement Initiative (SEI), which implements similar efforts in four other Humboldt Park schools. SEI, a project of LISC’s Building Community through the Arts (BCA), places artists in classrooms to create cross-disciplinary arts projects that address the culture of the community and further the broader aims of community development.

The mural – a series of plastic silhouettes of students portrayed against a colorful background made with mylar tape – is affixed to two sides of a cyclone fence surrounding a vacant lot on the northeast corner of North and Kimball. It was officially unveiled at a May 17 ceremony attended by students, artists, neighbors and local officials.

“People were distraught about the accident,” said Bancroft, who has worked at Stowe for the past year. “This project is helpful in showing students that art can happen through a context. They’re not just doing it for art’s sake.”

But students aren’t the only ones learning through the North Avenue mural project or others generated by SEI, said Jorge Félix, of the Institute of Puerto Rican Arts and Culture (IPRAC), which with the Chicago Arts Partnerships in Education (CAPE) administers SEI.

The mural’s imagery incorporates silhouettes of children, the mother holding her two children, and the words “respect signs.”

“In addition to the artists training the students, the program is about informing local artists who are new to the community what the culture is like here,” he said. “Art can change minds and it can educate.” And through SEI, that process is a two-way street.

In another recent SEI project, at Lowell Elementary School, teachers Carmen Rivera-Kurban and Mary Muniz and visiting artists Charly Barera and Patricia Reyes created an original “plena” song for the school band and designed and printed original attires for the performance. The project addressed issues of cultural relevancy in the curriculum.

SEI is funded by LISC/Chicago, the City of Chicago Cultural Outreach Program, and The National Endowment for the Arts. Building Community through the Arts (BCA), an initiative of LISC/Chicago, celebrates the diversity of talent in three Chicago neighborhoods by bringing cultural relevance to community development.