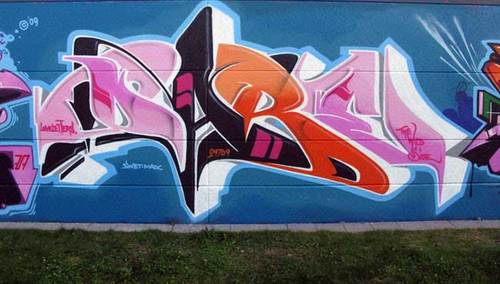 Sigi von Koeding or Dare as he was better known was an artist that inspired countless people over his 23 year painting career. Myself included. He was a true graffiti artist yet still managed to be experimental and left of field.  I remember Mare 139 telling me how incredible Dare’s new paintings were once, and coming from someone like Mare, that’s high praise indeed! He was a true master of letters, the way he shaped and twisted them was truly magical and he had a talent for style that few others will ever come close to! Dare was a legend whilst he was alive and traveling the world painting his pieces with expert precision and his status as a graffiti will no doubt rise to new heights following his death.

Dare lost his battle with cancer and died in hospital in his hometown of Basel, Switzerland on the evening of March 6th 2010. He will always be remembered by his fans and friends alike and his status as the Swiss graffiti Master is now truly cemented in our culture.

Dare and I were planning on painting together this year. So I’ll be doing that wall in his honor now.

As Swet wrote on his most recent painting - THE REAL KING HAS LEFT THE BUILDING”...
Remi/Rough