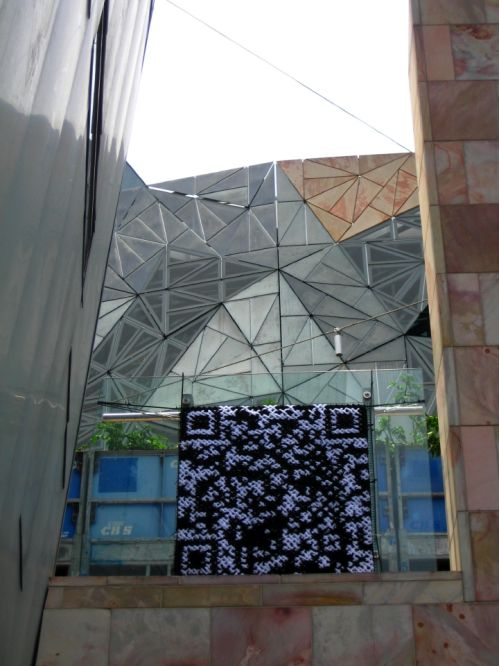 “I’ve been working on stitching QR Codes for some time now.  I’ve been doing them on regular Aida fabric (14 count mostly) and they’ve been working really well.  So I decided to do it large scale.  This project was stitched with black and white finger knitted wool and stitched on animal fencing (which is tough to work with but has a lovely strong and square grid).

QR Codes, or Quick Response Codes are an open source mobile phone read bar code type technology which originated from Japan (download the free reader here).  While the Japanese tend to use QR codes for communicating public service information ie public transport timetables.  The introduction of QR Codes to Australia has largely been based in advertising (ugh).

So I’ve been working QR Codes in cross stitch as a way of exploring non-corporate alternatives to this potentially very interesting and useful communication medium.

The piece designed for The Streets of Melbourne is designed to make a very clear statement on the irony of a privately owned and operated city square.  A space that, within Western culture, has traditionally been the primary space for free speech.  And of course this space in particular is part of the traditional gathering grounds for the people of the Kulin Nations.

It is to the Kulin Nations that this piece, QRacks in the Land, is dedicated.”