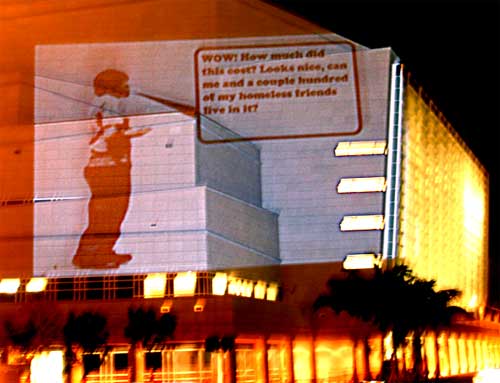 ““WOW! How much did this cost? Looks nice, can me and a couple hundred of my homeless friends live in it?”

In August, Ivan, an artist/activist in Miami,  began doing guerrilla projections of images on the new building developments that are appearing in and around downtown Miami.

He continued to do them until one night he and his friends were pulled over by the Miami police with their guns pointed inches from their head through the driver and passenger side windows. After two hours of being called anarchists and that what they were doing was “not art” and just “fucking around” he decided to stop doing the projections to work on other projects.

You can watch a seven minute video of some of the best scenes and phrases from the projections by clicking here.